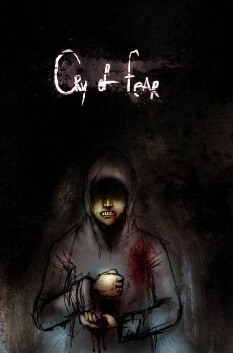 Cry of Fear is a survival horror game developed by Team Psykskallar. Though originally a mod for the video game Half-Life in 2012, it was released as a standalone product the following year.

Cry of Fear began development in 2008. The mod was delayed several times due to time limitations before being released in 2012. During the 4 years of development of Cry of Fear, many ideas were scrapped, while others were improved. For example, the phone's flashlight was initially made to illuminate an area around the player. This was later changed to illuminate the area in front of the player. The inventory system was also reduced from 12 slots to 6. At its beginning, Cry of Fear used the standard Half-Life renderer which was later replaced by the one from Paranoia, another popular Half-Life modification. Changing the renderer allowed the developers to bypass some limits imposed by the traditional renderer and added new engine effects such as texture bump mapping, specular reflection and 3D skyboxes.

The player controls Simon Henriksson, a 19‑year‑old who wakes up in an unknown alley shortly after being hit by a car. The player must navigate the city solving puzzles and fighting monsters to progress. The game switches between normal gameplay levels representing the city and surrounding areas and "nightmare" levels, similar to those found in the Silent Hill series of games.

Cry of Fear features many unique mechanics, such as the limited inventory system, which allows the player to carry only 6 items at a time and does not pause the game while the inventory screen is open. Another unique mechanic is the ability to dual-wield inventory items, allowing the use of two weapons at a time, or one weapon and a light source. Item combination is also possible from the inventory screen. Health is recovered by the use of morphine syringes, which can blur the player's vision if overused. Stamina is consumed through strenuous actions such as running and jumping, and can be recovered by resting or the use of morphine syringes.

Some days before Cry of Fear's anniversary, Valve released a Half-Life update for Linux compatibility, making changes in the folders and engine. This update made several Half-Life mods, including Cry of Fear, incompatible with the base game. Team Psykskallar decided that, since no more could be done for the mod itself, they would finish a standalone version. Confusion due to Valve regarding Cry of Fear's status as freeware caused the game to be delayed until April 25, 2013.

Cry of Fear's story spans seven to eight chapters, depending on the player's actions.

The story begins in a dark and gloomy city in Sweden, with Simon waking up in an alley after being struck by a car while trying to help a wounded man. Much of his time is spent exploring and fighting off crazed, deformed humanoid creatures. He also receives flashbacks telling the story of what happened after the accident, from the police response to the resulting hospital stay. Along the way, he meets a cryptic and violent doctor who says he can't trust Simon, and a childhood friend and love interest named Sophie, who commits suicide at the will of a creature named Carcass. The player is given the option to choose whether or not to fight and kill Carcass, as well as whether or not to help the doctor by giving him a gun.

If given the gun, the doctor turns on Simon and the two of them fight, with Simon emerging victorious. He then has a flashback of the doctor talking to Simon (who is confined to a wheelchair as a result of the accident). The doctor tells Simon that the medication will not help him by itself, and recommends that Simon try a cognitive therapy, asking him to write a book about his feelings and anxiety.

If Carcass was killed and the doctor was given the gun, Simon finishes his book and prepares to commit suicide, but he is interrupted by an evil counterpart, Book Simon, who opens the door of his apartment and disappears. At this point the player realizes that the events in Cry of Fear are nothing more than a metaphor of Simon's book therapy. The Simon controlled throughout the game is a depiction of the Real Simon who combats the trauma of his mind.

The real Simon (still confined to the wheelchair) follows Book Simon into another nightmarish world. Real Simon manages to defeat Book Simon, ending the nightmare sequence and triggering the 4th ending where Simon kills two police officers who were entering his apartment to stop him from committing suicide. Doctors testify that Simon had a psychotic episode, and he's transferred to a mental hospital. Receiving treatment from Doctor Purnell (who was the doctor seen throughout the game) and being regularly visited by Sophie, he finds himself at peace and finishes his book, saying that it has changed his life.

If Carcass isn't killed and/or the doctor isn't given the gun, Simon will commit suicide after finishing his book, unlocking the eighth chapter. Simon must travel through a different nightmarish world and reach Sick Simon, who is a depiction of the real Simon. After defeating Sick Simon, one of the game's three "bad" endings plays.