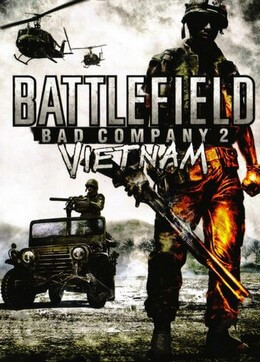 
Bad Company 2: Vietnam is an expansion pack for Battlefield: Bad Company 2 which takes place during the Vietnam War. It was released on December 18, 2010 for Microsoft Windows through the EA Store/Steam, and on December 21 for PlayStation 3 and Xbox 360. It is available as a retail package and via download. The retail package, however, only includes product key for internet activation. The expansion has received positive reviews, with praise for its "fun, close encounters" and use of licensed music tracks from the Vietnam war era.

The expansion pack contains 5 new maps, 6 new vehicles, and 15 new weapons. The fifth map, Operation Hastings, was originally set to be unlocked when the playing community reached 69,000,000 team play actions (revives, resupplies, assists etc.) on each platform. While it was unlocked for PC on December 30, 2010, the map was released early on PlayStation 3 and Xbox 360 as a "new year's gift" from DICE. It also includes 49 contemporary music tracks which can be listened to via an in-game radio, as well as new voiceovers for both American and Vietnamese forces, based on authentic communication from the Vietnam war. Ten new Xbox Live achievements/PlayStation Network trophies are also available to unlock.

Most critics agreed that the expansion is worth buying for users who already enjoy the game's multiplayer component. IGN praised it as being one of the best multiplayer offerings of the year, scoring it 9.5 out of 10. Destructoid gave it 9 out of 10, calling it a "no brainer" for active Battlefield fans. GameSpot gave it 8.5 out of 10, praising the maps, atmosphere and the new vehicles and weapons, but criticizing the online stat-tracking and the reduced emphasis on player progression. Joystiq stated that it plays differently from the original game, but called it a success nevertheless, awarding it 4 out of 5 stars.