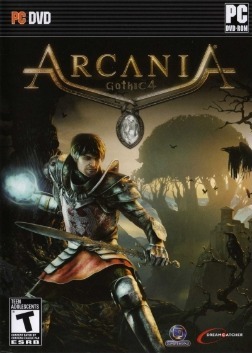 Arcania: Gothic 4 is an action role-playing video game, part of the Gothic series, developed by Spellbound. It was published by JoWooD Entertainment in 2010.

The game was released on October 12, 2010 for Microsoft Windows and Xbox 360. In 2013, Nordic Games released ArcaniA and its expansion, Arcania: Fall of Setarrif, as Arcania: The Complete Tale for PlayStation 3 and Xbox 360, followed by the PlayStation 4 version in May 2015.

In comparison to the predecessors, the game mechanic was simplified. For instance, there are only three spells available (but upgradable). Also, the character can only interact with "named" characters, those who have a name.

War covers over the Southern Islands like a blood-drenched shroud and finally, war reaches the idyllic isle of Feshyr in the Southern Seas. The protagonist of Arcania: Gothic 4 returns from an adventure to find his home and village torched and looted. The aggressors’ ships - with an Eagle displayed on their billowing sails - escape over the horizon.

Seeking revenge, the hero leaves the destroyed village behind and soon realizes that this cowardly attack did not just happen on a corrupt king's whim. An evil power lies waiting at the threshold of this world, and our hero will need to face this nameless evil. Yet the hero is not alone - his fate is linked to that of a beautiful, mysterious lady as well as a powerful artifact from the long-forgotten distant past.

The start of the development was officially announced on August 23, 2007, along with the name of the new developer. The project was originally entitled Gothic 4: Genesis; the name change to Gothic 4: Arcania was announced in 2008. At the Games Convention in 2008, JoWooD Entertainment announced another name for the game - "Arcania: A Gothic Tale". The name change serves two purposes. First, it hints at a world rich in magic and fantasy. Second, and completely from a marketing perspective, it helps give the Gothic franchise a fresh start in North America, where it has failed to gain significant popularity. During a press conference of the Polish distributor CD Projekt, the games to be published by the company were presented, including Arcania. The title of the game was stated as Arcania: Gothic 4. A Polish fan-site asked the community manager Reinhard Pollice, known as Megalomaniac, regarding that issue and he confirmed the change of the name. On April 1, JoWooD marketing manager Clemens Schneidhofer confirmed the new name to GamersGlobal.de: "I can confirm that! Because the date of the release is already defined (more details soon in a press release), we decided to leave the working title "Arcania – A Gothic Tale" behind and to announce the final name "Arcania - Gothic 4". This change is available for all countries (EU & US)."

As announced at the CD Projekt Conference 2010, Spellbound Entertainment was developing the Xbox 360 and Microsoft Windows versions, while later, another studio would port the game on the PlayStation 3 system. Later news confirmed that the PlayStation 3 version had been delayed until 2011, while the Xbox 360 and Microsoft Windows release remained unchanged. At the 2008 Games Convention in Leipzig, JoWooD Entertainment presented Arcania behind closed doors.

Arcania's physics engine is NVIDIA PhysX as confirmed by a JoWooD Entertainment representative.

JoWooD Entertainment planned to make Arcania an AAA title - the most successful title from the Gothic series, and one of the best RPGs of 2010. In September 2009 the Gothic Community sent a letter to JoWooD Entertainment, complaining about the lack of support and information regarding Arcania: Gothic 4.

In March 2010, Dr. Albert Seidl, JoWooD's former CEO, revealed that Arcania would be released in the autumn of 2010. In June 2010, Franz Rossler, JoWooD's CEO, confirmed via interview that Arcania's release date had been scheduled for October 2010. A demo for the game was released on September 24, 2010.

Arcania was first presented to the general public in August at Gamescom in Köln, Germany. The short playable part featured the very beginning of the game.