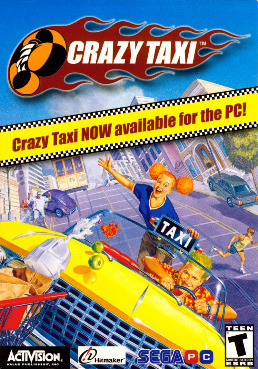 Crazy Taxi is an open world racing video game developed by Kenji Kanno and his team at Hitmaker and published by Sega. It is the first game in the Crazy Taxi series. The game was first released in arcades in 1999 and then was ported to the Dreamcast in 2000. Gameplay is based on picking up taxi customers, and driving to their destination as quickly as possible. Reception to Crazy Taxi has been mostly positive. It was ported to other platforms numerous times, including the PlayStation 2 and Nintendo GameCube by Acclaim in 2001, and then Microsoft Windows in 2002. The game has also been re-released for the PlayStation Network, Xbox Live Arcade, iOS, Android, and is featured on the Dreamcast Collection. It became one of the few Sega All Stars on the Dreamcast, and also earned Greatest Hits and Player's Choice status on PlayStation 2 and GameCube respectively. Sega followed up on the success of Crazy Taxi with numerous sequels, the first being Crazy Taxi 2 for the Dreamcast, which included several gameplay changes.

The main objective of the game is to pick up customers and take them to their chosen destination as quickly as possible. Along the way, money can be earned by performing stunts such as near misses with other vehicles. The player is directed to a destination by a large green arrow at the top of the screen. The arrow does not adjust based on obstacles, but rather points in the general direction of the destination. Once the player arrives near the destination, they must stop within a specified zone. When the destination is reached, that customer's fare is added to the player's total money earned. Ratings are then awarded depending on how long the player took to complete the journey. If the customer's timer runs out before the player reaches the destination, the customer will jump from the taxi without paying the driver.

Players can select three-, five- or ten-minute settings, or the Arcade Rules used in the original coin-op version of the game. In the three time-limited settings, play continues for the designated period of time, after which the cab automatically stops and no more points can be scored. Under Arcade Rules, the player starts with an initial time limit of one minute, which can be extended through time bonuses earned for quick deliveries.

Console versions of the game also feature a mode known as Crazy Box, a set of minigames that feature challenges such as picking up and dropping off a number of customers within a time limit, bowling using the taxi as a ball, and popping giant balloons in a field.

The arcade version of the game includes one stage, and an additional "Original" stage was added for the console versions. Both stages are based in sunny coastal California locales, with steep hills and other strong similarities to San Francisco. The player has a choice of four drivers and their cabs, each of whom has slightly different attributes.

The arcade game was developed by Hitmaker as a variation from then-current arcade titles. The Crazy Taxi cabinet ran on Sega Naomi hardware. It was originally released in arcades as a sit-down machine. An upright version was later released. Over the next few years, the game would be ported to the Dreamcast, GameCube, PlayStation 2 and Microsoft Windows. The ratings board for South Korea revealed on June 1, 2010 that the game was rated for release on Xbox Live Arcade. On June 10, 2010, Sega announced Crazy Taxi would be one of several Dreamcast titles to be released for the PlayStation Network and Xbox Live Arcade, and that it would be available in Fall 2010. These ports originally were to force a 4:3 aspect ratio, with widescreen monitors showing blue bars on either side of the screen. In October 2010 it was announced that Crazy Taxi would feature full widescreen support. The game is a port of the Dreamcast version, including both the original arcade and the Dreamcast-exclusive level. The PlayStation Network port was released November 16, 2010, while the Xbox Live Arcade version was released the following week. The game has also announced for the Zeebo console, though no release date has been set.

In October 2012, Sega announced that Crazy Taxi would be brought to the App Store on iOS devices. The game includes the arcade map and the map introduced for consoles. It also includes all Crazy Box challenges. As in the console versions, if all challenges are completed, a pedicab is unlocked to play the main game with. The taxi can be controlled though either the touch screen or by tilting the device making use of its accelerometer. Critics were impressed with this port as the maps remained unchanged and the controls were intuitive.

Crazy Taxi producer Kenji Kanno noted that the time extension on gameplay was a breakaway of the current "100 yen for 3 minutes" that persisted at the time for arcade games, and rewarded players with longer playing times by performing well in the game. In addition to providing a game that could be played in short sessions, Kanno wanted a game to explore the "daily life and routine" of a taxi driver. In the development of the Dreamcast version of the original arcade game, the developers included a larger map in addition to the arcade one, as to create a feeling of "being lost" and allowing home console players to have fun "learning the town". Mini-games were developed for this version as to "let the player play longer if he improved skill" by offering challenges that were both fun and educational. Over one hundred different ideas for mini-games were developed by the team but then pared down for the Crazy Box mini-game challenges for the game.