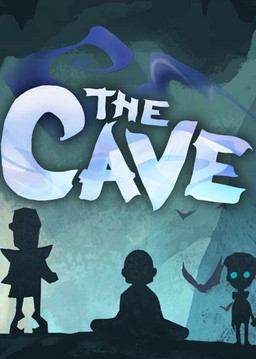 The Cave is a puzzle-platform/adventure video game developed by Double Fine Productions and published by Sega in January 201 on the PlayStation Network, Nintendo eShop and Xbox Live Arcade storefronts via the PlayStation 3, Wii U and Xbox 360 consoles and on Steam for Microsoft Windows, OS X and Linux. It was later released on October 3, 2013 on iOS devices, and on December 2, 2013 on the Ouya.

The game was created by Ron Gilbert, building on an idea that he has had for nearly twenty years about a cave that lures people into it to explore their darker personality traits. The game is rated "teen" for blood and violence. The game borrows concepts from his earlier 1987 game, Maniac Mansion, such as the player initially selecting three different characters from a cast of seven to explore the Cave. Many of the game's puzzles require the three characters to work in coordination to complete, while some puzzles are specific to the unique abilities of a character; in this manner the Cave can only be fully explored through multiple play-throughs.

The Cave's story is based on a magical talking cave (voiced by Stephen Stanton) with a labyrinthine set of tunnels within it. Seven characters, drawn from across time and space and harboring dark secrets, have come to the Cave, believing they can "learn something about themselves and who they might become", as stated by Gilbert. In one example, a knight character goes to a princess for her amulet, which is the key to unlocking the pulling of the sword, who tell him to bring the treasure the dragon is guarding. The knight then succeeds, but forgets to close the gate to the dragon's den, in turn causing the dragon to eat the princess and coughing up the amulet. The knight then goes to the king with the amulet and is allowed to pull the sword, which was impossible at first due to lots of rocks beneath it - however, our characters overcome it by blowing it with dynamite. He then pulls out the sword, and the king "ran off to congratulate his favorite daughter", and gets eaten by the dragon himself. At the start of the game, the player selects three of the seven characters, which they are then locked to for the remainder of the game; players can restart a new game to select a different trio of characters. The characters are based on stereotypical figures, such as a hillbilly, a pair of twins (acting as one character), and a scientist.

As the player controls the trio to explore the Cave, they collect objects and interact with the environment in a manner similar to an adventure game. The exploration of the game is based on 2D platformer elements, though the game is presented with 3D graphics. Exploration is described as being "Metroidvania"-like, where more of the Cave's tunnels and chambers become accessible as players collect objects in a manner similar to Metroid or Castlevania. The player will need to work with all three characters, switching between them typically to activate multiple parts of a puzzle; one example shown in early press demonstrations was to use one character to ring a bell to distract a monster, a second character to repair a hot dog vending machine so to provide bait, and a third to operate a giant claw machine to pick up the monster to clear their path. Each character has a unique ability to aid in maneuvering the cave tunnels, leaving some areas inaccessible if the appropriate characters aren't chosen at the start; for example, the adventurer is able to swing herself across gaps with a rope, while the time traveler can phase shift a short distance, passing through closed gates. In addition, some areas of the Cave are accessible only to one of the specific characters; such as the knight finding a castle or the scientist discovering a laboratory; these areas represent the deep desires and dark aspects of a character that lured him or her to the Cave in the first place. While there are hazards that can kill a character, the character respawns shortly afterwards nearby, allowing the player to reattempt the move. Throughout the game will be iconographs for each of the three characters, which the player will need to get near to activate; these provide one of several still art images that reveal the character's back-story.

The game is primarily a single-player game, but up to three players can participate cooperatively on the same computer or console, each controlling one of the three selected characters.

Ron Gilbert has been working with adventure games since his days at LucasArts, including several collaborations with Tim Schafer and Dave Grossman; together, they developed games like Maniac Mansion, its sequel Day of the Tentacle, and the first games in the Monkey Island series. Gilbert left LucasArts in 1992, initially creating his own development studio but then moving on to other games, including contributing to Telltale Games' episodic series, Tales of Monkey Island based on the LucasArts series. Meanwhile, Schafer would stay with LucasArts until the adventure game market fell in the late 1990s, and created his own studio, Double Fine Productions, with several of the former LucasArts developers. Though Double Fine struggled with well-received but financially unsuccessful titles Psychonauts and Brütal Legend, it became successful in marketing four smaller games developed during an "Amnesia Fortnight" period in Brütal Legend's development between 2010 and 2011.

Gilbert has stated that the idea of The Cave has been one he has had for a long time; he said, of his idea, "People have really dark secrets, and going into a cave which is really dark and deep… that metaphor really resonated with me". While still at LucasArts, Gilbert had drawn out parts of a labyrinthine cave complex on paper, but the idea never expanded beyond that at that point. Prior to Gilbert's employment at Double Fine, he and Schafer continued to discuss game development and ideas; Gilbert had mentioned this cave idea, prompting Schafer to suggest him coming to work at his company to develop the idea. By September 2010, Gilbert was officially part of Double Fine to work on The Cave; at the time, Gilbert had stated that the yet-named title was "an entirely new concept" and that "fans of those old adventure games will like it". The timing of larger development of The Cave coincided with the resurgence in adventure games such as those produced by Telltale Games, and the success of the Double Fine Adventure Kickstarter. Gilbert also considered that with casual games becoming more mainstream and acceptable, the market can handle niche games such as adventure games which do not require fast reflexes. Despite the market potential, Gilbert found that pitching the game to publishers was still a challenge, as they did not perceive that a market would exist for such games. Through the act of pitching the game to publishers for the first time in his career, Gilbert had to move away from the free-form design he had used on previous titles and set out plans for the game as a whole, which he found as a benefit; the need to present information to potential publishers required him to think about the game as a whole while still allowing smaller elements to be added in at a later date as they saw fit.

(0) Comments on "The Cave Full Version"