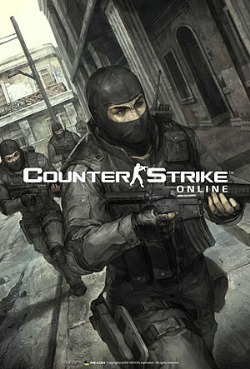 Counter-Strike Online is a first-person shooter video game, targeted towards Asia's gaming market released in 2008. It is based on Counter-Strike and was developed by Nexon Co. Ltd. with oversight from license-holder Valve Corporation. It uses a micropayment model that is managed by a custom version of Steam.

The game features a variety of additions over the international Counter-Strike, such as the introduction of female characters, numerous new weapons and skins for previous weapons. Most of the weapons are "locked" by default, so virtual cash or in-game points are essential to purchase them. Most special weapons, skins, power-ups, etc. can be purchased with cash points. A variety of other special items can also be bought with in-game points as well.

Scenarios: A group of 10 players must survive and annihilate computer-controlled enemies to clear specific goals. Some maps have to defeat a boss. Modes available are Zombie Scenario and Human Scenario.

On April 5, 2012, Nexon and Valve announced a partnership to develop Counter-Strike Online 2, which is based on an enhanced Source engine, and offered enhanced graphics, powerful impact physics, and more new features. It has been confirmed that Counter-Strike Online 2 uses the same Source version as Counter-Strike: Source. However, it is not a copy of CS:S since all the features in game like models, maps and sounds are completely rebuilt by Nexon of South Korea.