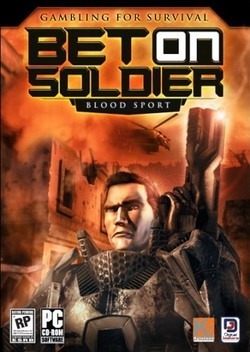 Bet On Soldier: Blood Sport is a first-person shooter developed by French video game developer Kylotonn, and published in the North American and UK market by Digital Jesters. The story revolves around an unknown World War, where elite soldiers meet each other in a battle to the death in one-on-one deathmatches. These deathmatches are broadcast all over the world as a televised sport named "Bet On Soldier", and since has become the favorite form of entertainment with many viewers betting on soldiers.

The game is a spiritual sequel to the alternate history first-person shooter Iron Storm. Although it is not explicitly stated that the games take place in the same fictional universe, they share many of the same themes, plot elements, character and level designs, and weapons.

Bet on Soldier is set on an alternate Earth in the year 1998, during a war that has lasted for 80 years and shows no signs of ever stopping. Every aspect of society revolves around warfare. Everyone earns their income through war; all men are paid soldiers, and women and the elderly work in the weapons manufacturing industry. The world is in a perpetual state of war between two competing power blocs, from the West, the Western Republic Federation (WRF), and from Asia, the United Asian Nations (UAN). The populace seeks solace from this grim world mainly through escapist television entertainment, with the most popular programming being "Bet On Soldier", in which elite soldiers face off against each other in one-on-one deathmatches, and where viewers can wager on the outcome of the fights.

Bet On Soldier differs from traditional first-person shooters as the player must select equipment before entering combat (much like Counter-Strike) and will be using that equipment throughout the mission. The player cannot change their inventory during a mission, or pick up weapons or ammo that either allies or enemies have dropped. In order to acquire more ammo or replenish their supply of armor, the player must spend money at various "purchase terminals" located throughout the levels. Money is earned by killing enemies, with more spectacular kills (i.e. headshots or deaths caused by exploding barrels) earning more cash.

The player can also hire up to two A.I.-controlled mercenaries that follow them throughout the level and assist them in combat. These mercenaries can be issued basic orders, such as to wait at a certain location or to follow the player.

At certain points in each level, the player is pitted in a one-on-one deathmatch against an enemy B.O.S. champion. The amount of money the player earns from these fights depends on how quickly they can kill their opponent.

The player assumes the role of Nolan Daneworth, a WRF soldier, who is suffering from amnesia. Following the unknown injury that caused it, Nolan decides to retire from the war and settle down as a farmer. He marries a nurse named Julianne, however, his world is turned upside down when 3 men come to his farmhouse and burn it down, killing Julianne. Although he doesn't recognize their leader, the two other men turn out to be B.O.S. champions; the Boryenka brothers, Mika (younger) and Igor (older), who are the highest-ranking soldiers in the league. Daneworth re-enlists in the WRF, and enters the B.O.S. tournament in order to confront the Boryenka brothers and exact his revenge.

Midway through the game, Daneworth is captured by a group called the Resistance, led by Hang Shaiming. The Resistance claims that the entire war is controlled by a secret organization known as the Syndicate, a military-industrial complex that controls the weapons manufacturing and distribution for both the WRF and the UAN, and thus continuously profits from the perpetual war. The Syndicate uses the media to maintain its control over the world, encouraging jingoism and war-mongering through the news, while satisfying the populace's need for spectacle with programs like Bet on Soldier.

Shaiming claims that Daneworth was a soldier for the Syndicate prior to his amnesia, and was tasked with hunting down Shaiming and the Resistance. However, Daneworth doesn't believe Shaiming, stating that the Syndicate is a hoax. Shaiming lets Daneworth go, but gives him a transmitter to call for the Resistance's help if he ever needs it.

Daneworth fights through several battlefields across the globe and kills several B.O.S. champions, finally making his way to the very top of the league and a final confrontation with Igor Boryenka. Daneworth defeats Boryenka, and interrogates him for information.