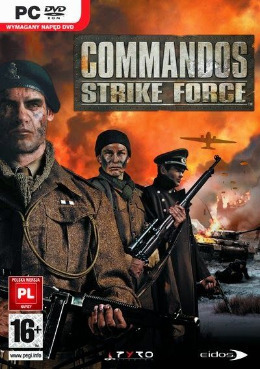 Commandos: Strike Force is a first person tactical shooter video game and the fifth and final installment of the Commandos series. It is developed by Pyro Studios and published by Eidos Interactive.

Released during the first months of 2006, the game makes a departure from the first four games. Although the missions are set up in a similar fashion (several different objectives, some to be achieved through stealth, others through use of force) and in most occasions the player is allowed to change between different characters, this is the first game in the series to apply a first-person perspective, like many other World War II-inspired games, in contrast to the overhead view of the earlier games. Hence, the game is far more similar to the Medal of Honor or Call of Duty games than to earlier entries of the series.

The game is split between three campaigns in France, Norway and Russia during World War 2. The first campaign takes place in France in 1942. The Strike Force commandos consist of the London sniper: Lieutenant William Hawkins, the New York Green Beret: Captain Francis O'Brien and the German spy and leader: Colonel George Brown. The commandos assist the French resistance to secure a village, but are forced to evacuate when their positions are compromised by a double agent (O'Brien suspecting that it is Brown). Brown aids the resistance in a town by taking out all targets of opportunity and liberating a medical doctor.

The next campaign takes the commandos to Norway, where they fight their way through a port town and several guard posts down a river, so that Brown can infiltrate a heavy water plant. Under cover of darkness, the commandos launch a surprise attack on a Nazi-occupied town to serve as an escape route from the heavy water plant. After a long battle, the enemy is repelled from the town.

The last campaign brings the commandos to Stalingrad, Russia to aid the Russian Officer Salenkov. Once in the sewers, Brown finds a platoon heading their way, so he has his team mates captured to allow himself to freely explore the garrisoned town and infiltrate the headquarters, where he rescues his team mates and liberates a precious Russian relic. During their exfiltration, Brown finds that the double agent and Nazi informer is none other than Salenkov. Brown kills the traitor and drives the commandos out of the HQ. Hawkins and O'Brien take out various targets in the ruins of the town, then group up with a Russian squad to repel several waves of Nazi invaders. Their victory ends with Brown uniting with the commandos and celebrating.

The player is required to complete a number of objectives in each mission. Throughout the missions, the player will make use of either one or two of the three members of the Strike Force. Each Strike Force member has particular weapons, tools and talents suited to their role. The Green Beret can wield Pistols akimbo and heavy weaponry. The Sniper use scoped rifles and throwing knives and is the only one who can swim. The Spy can use a silenced pistol and gas grenades (provided with a gas mask) and wear any uniforms acquired to fool lower ranked soldiers.

Pyro Studios was briefly considering a "Commandos 4" game, but ultimately decided to introduce their franchise to console systems by creating a First Person Shooter. Taking players' frustrations of the previous games into consideration, the company decided to balance the difficulty elements to their new game. They chose not to base the missions and levels on historically accurate events to make the game design flexible, while deriving some elements from the previous games in the series.

The game received "mixed" reviews on all platforms according to the review aggregation website Metacritic. Fans of the earlier games in the series felt that Strike Force lacked the trademark difficulty of the previous games. Similarly, it was promoted as mixing elements of strategy from the past games with traditional first-person shooter gameplay, but instead only hinted them while being predominantly action oriented. As a result, both critics and fans felt it did little to distance itself from the recent flood of similar games. In Japan, where the PlayStation 2 version was ported and published by Spike on September 21, 2006, Famitsu gave it a score of two sevens and two sixes for a total of 26 out of 40.

All games from the serie "Commandos"