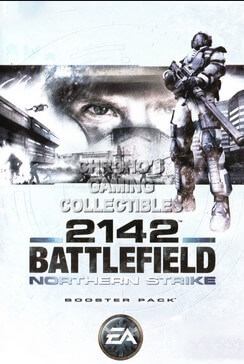 Battlefield 2142 is a 2006 first-person shooter video game developed by EA DICE and published by Electronic Arts. It is the fourth game in the Battlefield series. Battlefield 2142 is set in 2142, during a new ice age, depicting a war known as "The Cold War of the 22nd Century", in which two military superpowers – the European Union (EU) and Pan Asian Coalition (PAC) – battle for the remaining unfrozen land during a new Ice Age.

The game was designed primarily for multiplayer gameplay and allows for a maximum of 64 players on a server or a maximum of 16 players in single player mode against bots on Conquest mode. It has its own ranking system to keep track of the user's statistics similar to the one used in its predecessor, Battlefield 2. It opens up new categories of vehicles and weapons not seen in Battlefield 2. Battlefield 2142 has an unlock system that allows the player to choose a new unlock every time they achieve a new rank instead of forcing the player to purchase items. A booster pack called Northern Strike contains new maps, unlocks, and vehicles; a deluxe edition was released that contains Battlefield 2142 and Northern Strike.

As of July 2014, all official online components of the game have been deactivated following the shutdown of GameSpy.

Battlefield includes two gameplay modes, Conquest and Titan, the latter of which can only be played online in multiplayer maps (without using modifications ("mods")). Both modes support varying numbers of players, up to 64, depending upon the server a player chooses to join online. The single player mode consists of a maximum of 16 players, which includes 15 AI bots. Commander Mode from Battlefield 2 returns, as one player from each team can apply and either accept or turn down the role of becoming commander. The player in the commander position has vital roles in the game, such as deploying UAV's, artillery strikes, airdropping supplies or vehicles for his team.

Battlefield 2142 features four different playable kits. These kits can be selected at any time during gameplay. The kits are a combination of the kits in Battlefield 2, which had seven playable kits, but were less customizable and upgradeable in comparison. Each kit has different weapons and equipment that are unique. Each contains a basic weapon, a secondary weapon, and a knife. The knife differs in this game from Battlefield 2 because when a player is killed with a knife, the killer acquires the player's dogtag. The player is able to gain rank, options, and equipment by acquiring points in the game.

Battlefield 2142 has customization, allowing the player to gain more unlocks for one kit, which makes it more effective. Each class has two unlockable weapons and one passive unlock which upgrades the soldier's helmet, each helmet upgrade having different functions. The benefits of one soldier's helmet upgrade will be shared with their squadmates.

Assault: The Assault and Medic classes from Battlefield 2 are combined as the Assault kit in Battlefield 2142. The main weapons are assault rifles with unlockable rocket or shotgun add-ons. Other unlocks include advanced first-aid kits which can be deployed to restore the health of anyone standing close to it, smoke grenades for screening, and a defibrillator for reviving fallen comrades.