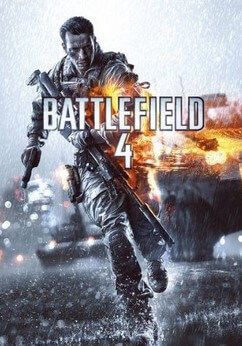 Battlefield 4 was met with positive reception. It was praised for its multiplayer mode, gameplay and graphics, but was also criticized for its short and shallow single-player campaign mode, and for its numerous bugs and glitches. It was a commercial success, selling over 7 million copies.

The game's heads-up display (HUD) is composed of two compact rectangles. The lower left-hand corner features a mini-map and compass for navigation, and a simplified objective notice above it; the lower right includes a compact ammo counter and health meter. The top right displays kill notifications of all players in-game. On the Windows version of the game, the top left features a chat window when in multiplayer. The mini-map, as well as the main game screen, shows symbols denoting three kinds of entities: blue for allies, green for squadmates, and orange for enemies, this applies to all interactivity on the battlefield. Battlefield 4 options also allow colour-blind players to change the on-screen colour indicators to: tritanomaly, deuteranomaly and protanomaly.

Weapon customisation is expansive and encouraged. Primary, secondary and melee weapons can all be customised with weapon attachments and camouflage 'skins'. Most weapons also have a default setting for different firing modes (e.g. semi-automatic, automatic fire), allowing the player to adapt to the environment they find themselves in. They can "spot" targets (marking their positions to the player's team) in the single-player campaign (a first in the Battlefield franchise) as well as in multiplayer. The game's bullet-dropping-system has been significantly enhanced, forcing the player to change the way they play medium to long distance combat. In addition, players have more combat capabilities, such as countering melee attacks from the front while standing or crouching, shooting with their sidearm while swimming, and diving underwater to avoid enemy detection. Standard combat abilities are still current including, reloading whilst sprinting, unlimited sprint, prone and vaulting.

The single-player campaign has several differences from the main multiplayer component. For the most part, the player must traverse mini-sandbox-style levels, in some cases using vehicles, like tanks and boats, to traverse the environment. As the player character, Recker, the player can use two campaign-only functions: the Engage command and the tactical binocular. The Engage command directs Recker's squadmates, and occasionally other friendly units, to attack any hostiles in Recker's line of sight. The tactical binocular is similar to a laser-designator, in the sense that it allows the player to identify friendly and enemy units, weapon stashes, explosives, and objectives in the field. By identifying enemies, the player can make them visible without using the visor, making them easier to mark for their teammates. At one point, Recker will briefly lose the tactical visor, forcing them to only use the Engage command to direct his squadmates on a limited number of enemies.

The campaign features assignments that require specific actions and unlock weapons for use in multiplayer upon completion. Collectible weapons return along with the introduction of collectible dog tags which can be used in multiplayer. Weapon crates are found throughout all levels, allowing players to obtain ammo and switch weapons. While crates hold default weapons, collectible weapons may be used whenever they are acquired and level-specific weapons may be used once a specific mission assignment has been completed by obtaining enough points in a level.