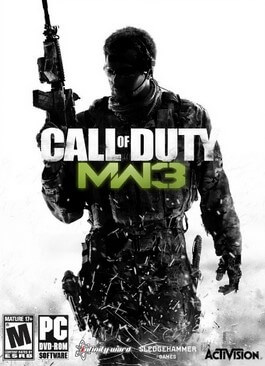 Call of Duty: Modern Warfare 3 (stylized as Call of Duty: MW3) is a first-person shooter video game, jointly developed by Infinity Ward and Sledgehammer Games, with assistance from Raven Software, and published by Activision. The game was released worldwide in November 2011 for Microsoft Windows, the Xbox 360, PlayStation 3, and Wii. It is the third and final installment in the original Modern Warfare saga, a direct sequel to 2009's Call of Duty: Modern Warfare 2, and the eighth Call of Duty installment overall. A separate version for the Nintendo DS was developed by n-Space, while Treyarch developed the game's Wii port. In Japan, Square Enix published the game with a separate subtitled and dubbed version.

The game's campaign follows Modern Warfare 2 and begins right after the events of its final mission. Similar to Modern Warfare 2, it is centered around the Task Force 141, which contains Captain Price, Soap MacTavish, and Yuri, one of the playable characters. Alongside the Delta Force and Special Air Service, they hunt Vladimir Makarov (antagonist of Modern Warfare 2), a Russian terrorist who leads the Russian Ultranationalist party. He leads several terror attacks across Europe, triggering a large-scale war between the Ultranationalists and friendly forces. For the game's multiplayer mode, new mode types and killstreak choices were brought in. Improvements were also made to the mode that solved issues that appeared in Modern Warfare 2.

Using an enhanced version of Modern Warfare 2's IW engine, development for the game began in 2010 with more than one developer. Prior to development, Infinity Ward co-founders Jason West and Vince Zampella left the company to form Respawn Entertainment. Other members had been fired or had left the company following the duo's departure. Sledgehammer Games had joined the Modern Warfare 3 development force, with Raven Software also developing the game's multiplayer mode. Following a large leak containing detailed information about the game, multiple teaser trailers were released with each showcasing a location featured in the game's campaign, leading up to a full reveal.

Modern Warfare 3 received positive reviews from critics. It won the award for Best Shooter at the 2011 Spike Video Game Awards. It was also a massive commercial success. Within 24 hours of going on sale, the game sold 6.5 million copies in the United States and United Kingdom and grossed $400 million, making it the biggest entertainment launch of all time (at the time). While Modern Warfare 3 was the final installment for the original Modern Warfare timeline, a new timeline will begin with the release of Call of Duty: Modern Warfare in late 2019, a soft reboot of the sub-series.

The player assumes the role of various characters during the single player campaign, changing perspectives throughout the progression of the story, which, like its predecessors, is divided into three sets of missions called "Acts". Each mission in an act featuring a series of objectives that are displayed on the heads up display, which marks the direction and distance between such objectives and the player. Damage to the player is shown by the visualization of blood-spatter or red-outs on the screen. The player's health regenerates over time as long as the player character avoids taking damage for a limited time. Mission objectives vary in their requirements, ranging from having the player arrive at a particular checkpoint, to eliminating enemies in a specified location, to standing their ground against enemy squadrons, directing remote-operated weapons, and planting explosive charges on enemy installations. The player is also accompanied by fellow soldiers who cannot be issued orders. Like its predecessor, the game includes an interactive scene of a terror attack against civilians, which the player is given the option of skipping due to the portrayal of graphic and potentially upsetting content, including harm to children.

Modern Warfare 3 features a new mode, called Survival. This mode allows between one and two players to fight massive waves of enemies, with each wave becoming increasingly difficult. It differs from the Nazi Zombies mode in Call of Duty: World at War, principally in that enemies no longer spawn at fixed locations like the zombies do, but instead appear at tactical positions based on the current location of the player. The mode is available on all multiplayer maps in the game. Players earn in-game cash for items such as weapons, upgrades, ammo, air/ground support and equipment if they kill or assist in killing enemies, while more items can be unlocked by earning XP which is also increased by killing enemies. Special Ops also returns from Modern Warfare 2. These challenge missions feature up to 48 stars, unlike its previous installment, which featured 69. Some weapons in Spec Ops are exclusive to that game mode, and are not available for play in Multiplayer mode.

The entire Killstreak reward system has been altered to make it more difficult for players to get early unlocks. Killstreaks are now known as Pointstreaks, and kills are no longer the only way to increase the player's pointstreak. Completing objectives such as planting a bomb or capturing a flag in Capture The Flag awards points towards the player's Pointstreak. Pointstreak rewards are organized into three different "strike packages" called Assault, Support, and Specialist.

The Assault strike package works the same as the Killstreak reward system in Modern Warfare 2 and Black Ops: the player must earn more and more points without dying. Once the player is killed, his or her points are reset to zero. Likewise, the Specialist strike package rewards players with perks after every second consecutive kill. Upon death, however, the player loses all the perks and the points are reset to zero. In contrast, the Support strike package are awarded based on the total points that the player has earned over the entire match, regardless of how often the player dies. It is important to note that if a player switches to a custom class with a different reward system (either assault or specialist) during game play, all points are automatically reset to 0. Players are allowed to choose which Pointstreak rewards they want to use when they gain it during the match, rather than choosing them between rounds.