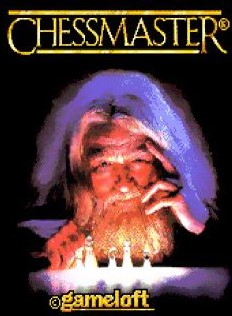 Chessmaster is a chess-playing computer game series which is now owned and developed by Ubisoft. It is the best-selling chess franchise in history, with more than five million units sold as of 2002.

Since Chessmaster 3000 for Windows 3.x the moves are explained with voice output.

The Chessmaster chess engine is called The King, written by Johan de Koning of the Netherlands. It was introduced in Chessmaster 4000; the first edition featured a chess engine written by David Kittinger, who went on to develop the engines for Interplay's USCF Chess, WChess for the German company Millennium 2000, and Sierra Entertainment's Power Chess, Majestic Chess and Disney's Aladdin Chess Adventures. The second edition had an engine designed by Kate and Dan Spracklen of Sargon fame.

The latest version, Chessmaster 11th Edition, was released in 2007, and has lagged behind more current chess engines. CCRL places it 84th on its February 2017 list.

The personality feature has inspired many amateur computer chess enthusiasts to attempt to find more optimum personalities. In Chessmaster 10th Edition, the creation of new personalities has been made easier than before.

Chessmaster won the four-game match against Christiansen held in September 2002, by a score of 2½-1½. The Chessmaster program was operated by John Merlino, the Project Manager of Chessmaster at the time of the match. Four different personalities were used in the match, the first three of which were based on famous human Grandmasters: Alexander Alekhine, Bobby Fischer, and Mikhail Botvinnik. The final game of the match used the default "Chessmaster" personality. Christiansen won the first game, lost the second and third games, and the fourth game resulted in a draw.

The combined sales of the Chessmaster series had reached 1 million copies by September 1996. The series surpassed 5 million units in sales by 2002, making it the highest-selling computer chess series ever at the time.

In 1989, Computer Gaming World found Chessmaster 2100's features "the clear winners" over Sargon 4, in 1992 reported that Chessmaster 3000 had added "a lot" to its predecessors, with new tutorial features and a variety of computer opponents making the game "a truly impressive sequel", and in 1994 approved of Chessmaster 4000 Turbo's new AI "personalities" based on historical chess players. 4000 Turbo received a perfect 10 out of 10 score from Electronic Entertainment.

Critical reaction to the Chessmaster series has been mostly positive. GameSpot commented that "Chessmaster has remained the consummate standard in console chess games since the '80s." IGN said that "the series itself remains the best way to play and learn about chess on the PC."

The mobile phone version of Chessmaster received a score of 9/10 from IGN, who called it "an absolutely superlative product that will be enjoyed for week after week by fans of the mental contest." IGN criticized the Nintendo DS version of Chessmaster: The Art of Learning for its lack of multiplayer, but gave it an overall positive review, with a score of 7.8/10. IGN criticized the "boring" presentation of the PlayStation Portable version of Chessmaster: The Art of Learning, but added that "there's no doubt that the information is valuable and can teach you the finer points of the game."

Although the Chessmaster engine is generally not as strong as the engines of other commercially available chess programs such as Fritz, critics have praised the Chessmaster series for its comprehensive tutorials aimed at players of amateur and moderate skill levels. In its review of Chessmaster 9000, IGN said that "the series has always distinguished itself with first-rate chess teaching tools," and welcomed the game's "appeal towards inexperienced and mid-level players. With all manner of tutorials, detailed analysis and exercises, the game helps ease newbies into the experience." GameSpot's review of Chessmaster 10th Edition commented positively on the game's "huge bundle of features aimed at everyone from the neophyte who's looking to learn the basics to the advanced wood pusher who may need practice for tournament play."