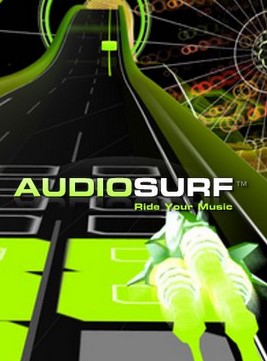 Audiosurf is a puzzle/rhythm hybrid game created by Invisible Handlebar, a personal company created by Dylan Fitterer. Its track-like stages visually mimic the music the player chooses, while the player races across several lanes collecting colored blocks that appear in sync with the music. The game was released on February 15, 2008 over Steam, a few days after winning the Independent Games Festival 2008 Excellence in Audio Award, heavily influenced by the hit soundtrack composed by Pedro Macedo Camacho; the full version was for a long time only available for purchase through Steam, but was later released as a retail product in Europe, by Ascaron. Audiosurf was the first third party game to use Valve's Steamworks technology. The Zune HD version was also released as Audiosurf: Tilt. The sequel, Audiosurf 2 was released with early access on October 2, 2013. The announcement was made through Dylan Fitterer's Twitter account.

In Audiosurf, the player controls a levitating vehicle similar to those found in Wipeout or F-Zero. The player then maneuvers it down a colorful multi-lane highway, collecting blocks in a manner similar to Klax. The ship is controlled either by a mouse, the arrow keys, the number keys, or a gamepad (Using XInput drivers such as the Xbox 360 controller, not the older DirectInput drivers). The game also supports the rumble feature of the Xbox 360 controller.

The music used in the game is chosen from the user's own library, from almost any DRM-free format, as well as standard redbook CDs; in addition, Audiosurf includes the entire soundtrack to The Orange Box as part of the download. An "Audiosurf Radio" tab is also included on the "Song Select" screen that allows the user to play the Audiosurf Overture, as well as a shifting selection of songs by featured independent artists.citation needed

The goal of the game is to score points by collecting colored blocks (called 'cars') and forming clusters of 3 or more of the same color. The more blocks one accumulates in a cluster, the more points are scored. In the default color setting of the game, blocks which appear in hot colors such as red and yellow are worth more points, while cool colors such as blue and magenta are worth less. Players are also awarded bonus points at the end of each track based on feats they achieved. These include finishing the song with no blocks left in the grid or collecting all the blocks of a certain color. Each track for each difficulty level has three medals: bronze, silver, and gold. These are awarded upon reaching the point total required for them. There are also additional game modes in the game where the goal of the game changes. For example, in the "Mono" game mode, players must collect the blocks, regardless of their color, and avoid the grey blocks. If the player can avoid the grey blocks until the finish, a 30% bonus will be gained in addition to the sum of the points earned. Upon completing the track, the score is uploaded to the score server together with the track length and form, any feats achieved, and the character used including the ironmode option if this was enabled. Scores are stored per song title, allowing people to compete. The uploaded length and track form make it possible to detect mislabelled or variant versions of songs in the score browser, and an option is provided to report possible fraudulent scores. There are three different high score lists for each song, for casual, pro, and elite characters respectively.citation needed

Audiosurf synchronizes the environment, traffic patterns and scenery with the events in the current song. Each music file imported to the game by the user is first analyzed by the game engine, and an ASH file (containing the dynamics of the sounds and how the track and blocks are arranged) associated to the music is created and saved (typically around 30 kilobytes). This helps speed up the loading time of future replays of the same sound file, and the ASH files can be deleted from the storage folder if the user so pleases without any negative repercussions. The game loads the environment from the ASH files, with the track's elevation, surface and layout reflected in the dynamics of the music being played. For example, if a player were to choose to play a very soft and mellow song, the track would be uphill, very slow, relaxing and rich in cool colors. If a player were to choose a very intense and loud song, the track would be downhill, sped up, thick with traffic and lit up with hot colors.

The player can choose between 14 different characters to play in the game. The characters are divided between three difficulty levels and each has its own unique ability. Each character has a unique icon, which is visible in the score browser. An "Ironmode" option is also available during character selection, which makes the game more difficult by immediately ending the track (or end scoring) when any of the three columns are overfilled with blocks, instead of the normal penalty of subtracted points (for easy characters), with several seconds of "respawn" time where all blocks are ignored (for medium and hard characters). The layout of blocks is also changed when Ironmode is activated. Shoulder Lanes are removed in Ironmode. Mono characters center around two colors of blocks: collecting colored blocks and avoiding grey ones. Mono Pro has the additional abilities of jumping and extending its fins to collect blocks outside its lane. Ninja Mono can also extend its fins, but must spend points to remove grey blocks from its board. Pointman can pick up blocks from the road for later use. Pointman also features hint arrows and shoulder lanes on all three difficulties. Pointman Elite can pick up multiple blocks. Double Vision mode has four lanes instead of the conventional three and two ships instead of one. The left ship occupies the left two lanes and is controlled by the keyboard while the right ship occupies the right two lanes and is controlled with the mouse. Vegas can shuffle the board by either holding left-click with the mouse or moving to the shoulder lane for a few seconds. Eraser can remove blocks of a particular color from the board and undo erases. Pusher can direct oncoming blocks to the lane immediately to the left or right of it. With the exceptions of Mono, all characters use three colors of blocks on Easy, four on Normal, and five on Hard. Eraser and Pusher do not have Easy difficulty versions, while Vegas is only available on Normal.