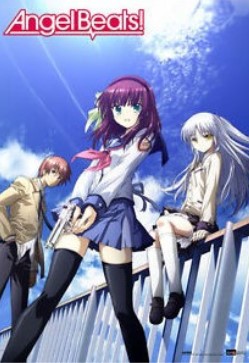 Angel Beats! (エンジェルビーツ! Enjeru Bītsu!) is a Japanese episodic visual novel developed by Key for Windows PCs. The game is based on the 2010 anime television series Angel Beats!, originally conceived by Jun Maeda, and also adapts scenes featured in the anime. The first of six volumes, titled Angel Beats! 1st Beat, was released on June 26, 2015, with a rating for all ages. An English version of 1st Beat is in development. The story takes place in the afterlife and focuses on Otonashi, a boy who lost his memories of his life after dying. He is enrolled into the afterlife school and meets a girl named Yuri who invites him to join the Afterlife Battlefront—an organization she leads which fights against God. The Battlefront fight against the student council president Angel, a girl with supernatural powers.

The gameplay in Angel Beats! follows an interactive branching plot line with multiple scenarios. Originally meant to be a role-playing game, Maeda eventually conceded to making it into a visual novel adventure game. When designing the game, Maeda did not want to include choices for the player that would not have a meaningful effect, so the choices given were focused to have an effect on the plot and character interactions. A reviewer noted that its game structure makes it feel more like a game compared to other adventure games released around the same time, which have less choices available to the player and less-divergent plot lines. 1st Beat ranked as the best-selling PC game sold in Japan for the time of its release, and charted in the national top 50 twice more after that.

ngel Beats! is a supernatural visual novel in which the player assumes the role of Yuzuru Otonashi. Much of its gameplay is spent on reading the story's narrative and dialogue. The text in the game is accompanied by character sprites, which represent who Otonashi is talking to, over background art. Throughout the game, the player encounters CG artwork at certain points in the story, which take the place of the background art and character sprites. Angel Beats! follows a branching plot line with multiple endings, and depending on the decisions that the player makes during the game, the plot will progress in a specific direction.

Each volume has a number of plot lines that the player will have the chance to experience. The first volume, 1st Beat, has three plot lines and the subsequent volumes will cover the rest of the character routes. Throughout gameplay, the player is given multiple options to choose from, and text progression pauses at these points until a choice is made. To view all plot lines in their entirety, the player will have to replay the game multiple times and choose different choices to further the plot to an alternate direction. 1st Beat includes 200 hidden achievements.

Angel Beats! is set in a world after death, which acts as a limbo where the dead learn to give up any lingering attachments from life before passing on. Those in this limbo can eat, feel pain, and can even die again, only to awaken later with no injuries. Objects not originally present in this world can be created from dirt depending on the familiarity of it when alive. In the case of weapons, this can range from simple melee weapons to more complex firearms and explosives. In addition, computer programs can be used to create a mixed reality, as when Kanade creates her supernatural powers via a program called Angel Player.

The protagonist Otonashi and the other characters are students at a high school populated by a large number of "normal" students and teachers referred to as "non-player characters" who are not human, but look and act the part. Inside the school, the characters often gather in the principal's office—headquarters of the Afterlife Battlefront (死んだ世界戦線 Shinda Sekai Sensen, (SSS)), an organization which fights against God for the cruel fates the SSS members experienced in life. In the SSS, there is an all-female band named Girls Dead Monster that acts as a diversion during missions, and a subterranean organization called the Guild that mass-produces weapons and supplies them to the SSS.

Otonashi is asked to join the SSS by its founder and leader Yuri Nakamura. The SSS fight against Kanade Tachibana, also referred to as Angel, the student council president of the afterlife school whose responsibilities require her to suppress the team's disruptive activities. Although the SSS initially views Kanade as their enemy, Otonashi eventually befriends her and she joins the SSS. Following this, Otonashi begins helping the other SSS members overcome any regrets they had in life so they can move on. In the process, Otonashi grows closer to the other characters as he learns more about them. Although the story contains romantic plot lines between Otonashi and each of the heroines, the pasts and conflicts of the characters are not meant to simply enliven the romantic elements, but also provide a significance that goes beyond romance.