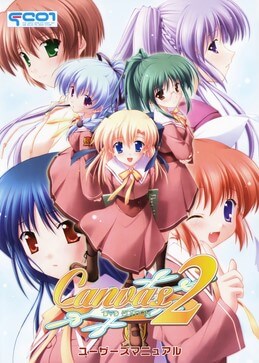 Canvas 2: Akane Iro no Palette (Canvas2 〜茜色のパレット〜, lit. Canvas 2 ~Red Colored Palette~), also known as just Canvas 2, is a Japanese visual novel developed by F&C FC01, a brand of F&C, released for Windows on April 23, 2004. The game was later ported to the PlayStation 2 by Kadokawa Shoten, on January 26, 2006. AiCherry produced a DVD Player Game version of Canvas 2 on November 28, 2008. An iOS version was released on January 12, 2013. A fan disc called Innocent Colors ~Canvas 2 Fan Disc~ was released for Windows on September 24, 2004. The game is a sequel to Canvas ~Sepia-iro no Motif~. Two other spin off games part of the Canvas series were released by F&C.

A 24-episode anime television series called Canvas 2: Niji Iro no Sketch (Canvas2 〜虹色のスケッチ〜) was produced by studio Zexcs, and licensed by Kadokawa Pictures USA in North America. It aired on eight different channels in Japan between October 3, 2005, and March 27, 2006, and was streamed on Crunchyroll. Two manga adaptations were published by Kadokawa Shoten, and three light novels have also been published, as well as multiple drama CDs.

Canvas 2 is a romance visual novel in which the player assumes the role of Hiroki Kamikura. Much of its gameplay is spent reading the text that appears on the screen, which represents the story's narrative and dialogue. The text is accompanied by character sprites, which represent who Hiroki is talking to, over background art. Throughout the game, the player encounters CG artwork at certain points in the story, which take the place of the background art and character sprites. Canvas 2 follows a branching plot line with multiple endings, and depending on the decisions that the player makes during the game, the plot will progress in a specific direction.

There are seven main plot lines that the player will have the chance to experience, one for each of the heroines in the story. Throughout gameplay, the player is given multiple options to choose from, and text progression pauses at these points until a choice is made. Some decisions can lead the game to end prematurely and offer an alternative ending to the plot. To view all plot lines in their entirety, the player will have to replay the game multiple times and choose different choices to further the plot to an alternate direction. Throughout gameplay, there are scenes depicting Hiroki and a given heroine having sexual intercourse, except in the PlayStation 2 and iOS versions, where these scenes cannot be viewed.

The series focuses on the lives of some students and teachers at Nadesico Academy both at school and their private lives. The main character of the series is Kamikura Hiroki, who lives with his younger cousin Elis. Hiroki is training to become a full-fledged art teacher while also trying to take care of Elis. When his childhood friend Kiri starts working at the school, drama begins to flare as he has to juggle his work, private life, and the feelings for these two important girls.