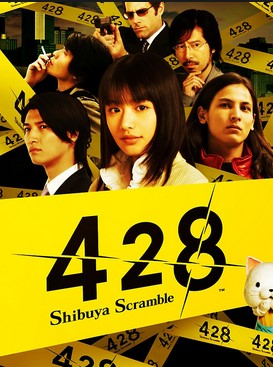 428: Shibuya Scramblea is a visual novel adventure video game produced by Koichi Nakamura with Jiro Ishii serving as executive producer, developed by Nakamura's company Chunsoft, and initially published by Sega, originally in Japan for the Wii on December 4, 2008. The game was ported by Spike to the PlayStation 3 and PlayStation Portable in September 2009. A version for iOS and Android was released in November 2011. A PlayStation 4 and Microsoft Windows version was released in September 2018.

428 is set in the Shibuya ward of Tokyo where the narrative is presented using a combination of scrolling text, live action stills and video sequences. The game shares many story and gameplay elements with Chunsoft's 1998 sound novel game Machi, the most prominent being the locale, Shibuya. Although Chunsoft does not openly state 428 is a sequel, the game contains numerous references to Machi, and an early marketing slogan reads "Breaking a long silence, Shibuya gets going again."

The game has received high praise from critics, earning a perfect score in Famitsu Weekly, Japan's largest circulating video game magazine, as well as acclaim from international publications. The game also features a special scenario contributed by Kinoko Nasu and Takashi Takeuchi of Type-Moon fame, who wrote and provided character designs for them respectively. This scenario by Type-Moon got a sequel as an anime television series titled Canaan, which aired in Japan from July to September 2009. A series of four novels based on the game were published by Kodansha between the months of September and December 2009.

428 is a visual novel adventure game where players take part in events from the perspectives of multiple protagonists, all acting in parallel with no knowledge of each other. Set in the modern Japanese city of Shibuya, Tokyo, the characters are involved in a mystery that cannot be solved without their interactions, and the plot is advanced by following clues found within the game's text and accompanying video sequences and making decisions on which path each protagonist should follow. Depending on the player's choices, a number of new scenarios become available, which ultimately lead to different outcomes and endings. The game has over a hundred alternate story pathways and 87 different possible endings.

Players read through and switch between multiple stories that take place in the same timeframe, each seen from a different character's point of view. Decisions made in one character's story can inadvertently affect the story of another character in unforeseen ways. The format is similar to earlier non-linear visual novels with multiple perspectives, such as Machi (1998) and Eve Burst Error (1995), and can also be compared to non-linear hyperlink films such as Pulp Fiction (1994), Magnolia (1999) or Vantage Point (2008).

For instance, the game opens with a detective (protagonist #1) waiting for a kidnapper to pick up the ransom money, which is being carried by a girl. Another character, a young man out for a walk (protagonist #2), happens to encounter the scene. Protagonist #2 now has a choice to approach the ransom-carrying girl or not; If he approaches, his story reaches a dead end by being wrongfully arrested, but not only that, the detective's story also reaches a dead end by making the wrongful arrest.

The player's role is to figure out whose actions are affecting whom, and find the right choices to lead every protagonist to the conclusions of their storylines. The game offers a time chart screen where the events of all the protagonists' stories are listed in chronological order.

Blue-colored text is interspersed within the body text. The colored text, called Tips, can be selected with the controller like a hyperlink. Tips, when selected, provide a short page of explanatory text, much like a tooltip. Tips can reveal the definition of a technical term, provide some insight on the topic, or just provide a short digression from the story at hand. Red-colored text, also selectable, marks the name of a different protagonist and allows the player to jump from one protagonist to another. Jumping from red text is often the only way to make a character's story move forward.

The game unfolds in a ten-hour period, which begins at 10:00AM of April 28 and ends at 8:00PM. The game is broken up into one-hour segments. Leading every protagonist to the end of the hour unlocks the next hour to be played.