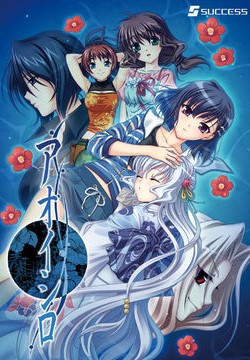 Aoi Shiro (アオイシロ) is an adventure game by Japanese developer and publisher Success Corporation, released for the PlayStation 2 in Japan on April 5, 2008, and was later ported to Microsoft Windows with extra content. A reduced price "popular edition," included in the SuperLite 2000 Series, was released on April 28, 2009.

Aoishiro is an adventure game that sets stage in both the modern real world and a mythical world. Aoishiro is the second in a line of yuri visual novel-style PS2 games from game maker SUCCESS and takes place in the same universe as its predecessor, Akai Ito.

The Seijou Girls Academy's Kendo Club is traveling to Shoushinji for summer training camp. Near there is an island, Urashima, where a demon extermination took place long ago. They arrive around the time of a festival which honors a god that is worshipped by the people of Urashima, it celebrates the onitaiji and ensure another year of health for the people. Around the time of the festival, the weather around Urashima worsens and storms will come.

A few days into their training Osanai Syouko finds a girl washed up on the shores near the location of the training camp who can not speak and doesn't seem to know much about herself. Aoi Shiro's story varies greatly based upon the player's decisions, which not only affect the flow of the story but also the ending the player receives, several of which suggest romantic feelings among the female characters.

Success first announced the production of a new visual novel in August, 2006, two years after the release of its previous visual novel Akai Ito. The game was first released on the PlayStation 2 on April 5, 2008. Success announced in August 2008 that Aoi Shiro would be released for Microsoft Windows on November 21, 2008, a free game demo of Aoi Shiro for Windows became available for download at Success' official website on October 3, 2008. Aoi Shiro for Windows was the number two top seller in its first week of release in Japanese PC game sales. A reduced price "popular edition," included in developer and publisher Success' SuperLite 2000 Series, was released on April 28, 2009, for PlayStation 2. On September 18, 2009, an unofficial English translation for PC version of Aoi Shiro was released.