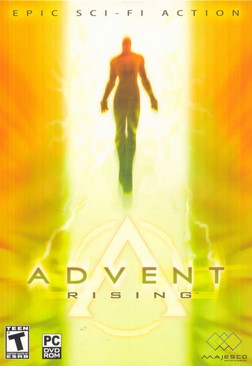 Advent Rising is an action-adventure third-person shooter video game developed by GlyphX Games and published by Majesco Entertainment. The game was released on May 31, 2005 for Xbox and on August 9, 2005 for Microsoft Windows. Its story was created by Donald and Geremy Mustard and featured a script written by science fiction writers Orson Scott Card and Cameron Dayton; the full orchestral soundtrack was done by Tommy Tallarico and Emmanuel Fratianni. As of September 14, 2006, Steam began offering Advent Rising for download.

Much-hyped Advent Rising was the first in a planned trilogy which also saw the development of a game that would take place alongside Advent Rising, called Advent Shadow for the PSP. Despite a large advertising campaign including promotion in cinemas, the game's retail performance fell far short of expectations. By the end of 2005, Majesco had completely revised its business plan to focus towards handheld games and canceled plans for future Advent Rising games.

A five-issue spin-off comic book series was produced and ran from October 2005 to November 2006. Plans for novel tie-ins by Orson Scott Card never came to fruition. In June 2006, Donald Mustard posted a statement on the website of his new venture, Chair Entertainment, stating that he "would be happy to finish the Advent series if the opportunity presented itself", but confirmed he does not currently hold the rights to do so. In 2008, Novint announced they are adding Novint Falcon support to this game and will sell it as Ascension Reborn for the Novint Falcon only.

The game's overall story was created by Donald and Geremy Mustard. The dialog and screenplay, however, was written by Orson Scott Card and Cameron Dayton. Card's influences are noticeable in the terminology which has been carried over from Ender's Game. The terms "vids", "Buggers", and "ansible" are all references from his critically acclaimed novels (though the term ansible was coined by Ursula K. Le Guin, and was not actually added to the script by Card himself, but by Donald Mustard).

Following its Xbox release, Advent Rising received mixed reviews from critics whose scores ranged from a high of 4.5 out of 5 (GamePro) to a low of 5 out of 10 (EGM). Reviewer scores averaged at a 68 on both GameRankings and Metacritic, while user scores averaged at 7.5. The most common complaints were the large number of bugs which caused a range of problems including freezing. Another common complaint regarded the difficulty in using the flick targeting system.

Advent Rising's visual design choice was noted by several reviewers, pointing out that the characters all appear fairly elongated, although it has been said that this was a deliberate stylistic choice.

Upon the release of the PC version of the game a month after the Xbox counterpart, Advent Rising was slightly better received, earning a 72 on GameRankings, a 70 on Metacritic, and an 81 on Venting Gamer with user scores averaging at 82. Many reviewers felt that the month long delay had been put to good use as many of the glitches in the Xbox version had been fixed. Framerate was also improved, with slowdowns becoming rarer.

A million dollars was offered in a contest via Xbox Live for the first player to find a set of hidden symbols spread throughout the levels of the game. Majesco was forced to cancel the contest when security issues with Xbox Live's global time syncing created an unfair playing field for competitors. Majesco offered, as compensation to those players, the choice of two free games (BloodRayne 2, Guilty Gear X2, Psychonauts, Raze's Hell, and/or Phantom Dust) and an apology on its home page.

An avid comics fan, game creator Donald Mustard originally realized the story of Advent Rising in hand-drawn comic books. He revealed in a 2005 interview: "With Advent, from day one, we conceived it initially as a comic book itself. Back when I was getting out of high school, we were laying the foundation for Advent. I drew the first several hours of what would ultimately become the game as a comic book." The release of the Advent Rising game was supported by a promotional one-shot comic book produced by DC Comics. The comic was written by Lee Hammock and drawn by Billy Dallas Patton as a direct tie-in to the action of the game. It was inserted free of charge within a handful of comic books published by DC.

Another comic book, this time a series, grew out of the partnership between Majesco Entertainment and 360ep, a young entertainment properties management concern founded by former Marvel Comics CEO Bill Jemas. The new comic series, Advent Rising: Rock the Planet, was written by Rob Worley, with layouts by Arthur Dela Cruz, pencils by Cliff Richards, inks by Dennis Crisostomo, colors by Cris Delara, and letters by Simon Bowland. The comic was produced with oversight by Mustard and Jemas. This new series begins the franchise some ten years before the events of the game. It follows the adventures of Gideon, Ethan, and Olivia in their formative, teenage years. The first issue was published on October 26, 2005. The fifth and final issue was released on November 22, 2006.