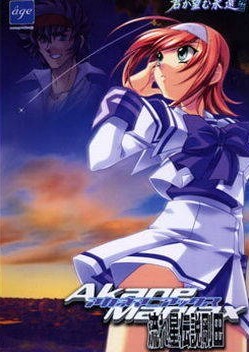 The game starts several weeks after the end of Kimi ga Nozomu Eien and ends a day before Muv-Luv Extra starts. Most of the main characters from Muv-Luv can be seen in the game (the only notable exception would be Mitsurugi Meiya, who is seen in the Original Video Animation (OVA). It was originally released in parts with Tech GIAN without voice acting, but was later released as a game with full voice acting for members of âge's official fanclub.

There is also a three episode OVA roughly based on the game, with the first DVD released on November 25, 2004. The series was animated by Silver. Many characters in the game parody Tekkaman and Tekkaman Blade. The OVA mainly parodies robot shows such as Mazinger Z. Akane Maniax marked the first appearance of Gouda Jouji, who would later become a recurring gag character in âge's games.

Jouji Gouda is a new transfer student at Hakuryo High School. On his first day of class, he fell in love at first sight for Akane Suzumiya and boldly proposed to her on the spot. The two characters conflict with each other greatly, but Jouji never gives up and would do anything to express his love towards Akane. Although his attempts to win Akane's love at first do nothing but anger Akane, he gradually starts to make an impression on her, inspiring Akane to be more honest about her own feelings.

There are two possible endings. In the good ending, Akane admits she might have developed feelings for Jouji—but confesses that she might be using him as a rebound guy since he reminds her of her sister's ex-boyfriend. He then finds a new true love in the form of Muv-Luv's Sumika, only to have his heart broken about a minute later when she goes running after Takeru. In the true ending, Jouji transforms into a hero called Dimension Knight Tekkumen (時空の騎士テックメン, "Jikuu no Kishi Tekkumen") and fights aliens. Either way, he is said to have transferred out of the school after being scouted for a baseball team in Muv-Luv Extra, which Kouzuki suggests might have been Meiya's doing.

In the ending of the later produced Akane Maniax OVA, Akane told Jouji that she has been accepted by an American university and will go there to further her studies. She still said it was nice to have met him. Later, after seeing Sumika running to Takeru, Jouji was taken away by Meiya and Tsukoyomi in their long limousine, presumably arranged to get some compensation and transfer to another school as a result.