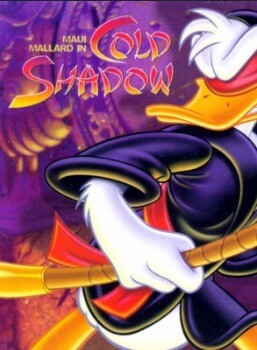 The Genesis version was only released in Brazil and Europe, apart from an American release on the Sega Channel. The game was one of the first games to be released under the Disney Interactive Studios label.

The game premiered for the North American market at Walt Disney World in September 1996. Three Maui Mallard kiosks were prepared in the Disney Interactive exhibit at the Innoventions plaza of EPCOT. Visitors could play the full game for an unlimited period of time and interact with Attractions Hosts and Hostesses who were available to play against them and share tips and tricks.

The game stars Donald Duck in a metafictional role as duck detective Maui Mallard, who adopts the name "Cold Shadow" when he dresses up in ninja garb. For the North American versions of the game, all Donald Duck references are omitted for unknown reasons and the main character is only known as Maui Mallard. Though the end of the game informed the player to look forward to Maui's next adventure, there have been no other appearances of Maui Mallard or Cold Shadow in any medium.

The game was rereleased on the Steam and GOG digital storefronts in May of 2019.

Besides typical platform game gameplay (running around, jumping from platform to platform), one of the game's most distinctive gameplay features is allowing to switch the player character's form to suit one's needs. The player begins the game as Maui, whose only means of self-defence is an insect-launching pistol that can launch several forms of bugs, some of them combined for greater effect. However, once the player reaches the second level, Maui transforms into Cold Shadow, his ninja alter ego, who defends himself with short-range attacks using a bo staff. Cold Shadow's staff is also primarily used to explore the level further, such as climbing a narrow tunnel. After the second level, the player can switch back and forth between Maui and Cold Shadow at will, provided he has enough ninja tokens for the transformation. The amount of ninja tokens Maui or Cold Shadow holds determines Cold Shadow's strength – who can then chain more and more attacks as his skill improves – when played as him in the SNES version. On Genesis, however, Maui needs to collect red ninja tokens instead, the amount of white tokens being useful for metamorphosis alone. Some levels of the game, however, prevent Maui from transforming at all, as Cold Shadow cannot bungee jump on vines, for example, which forces the player to use Maui throughout the level.

Maui Mallard is a "medium-boiled" detective visiting a tropical island when the mysterious Shabuhm Shabuhm idol goes missing. Shabuhm Shabuhm is considered the island's native guardian spirit, and unless the idol is recovered, the whole island will explode. Maui is put on the case, and his investigations lead him through a creepy mansion to ancient ninja training grounds -where a witch doctor gives him the ability to change into Cold Shadow- and a native village, where Maui is thrown into a volcano as a sacrifice to the native gods. Maui survives the volcano, and the islanders put him through the "test of duckhood", which Maui passes, gaining the natives' trust. The natives tell Maui that the only one who knows the location of Shabuhm Shabuhm has long since died, and Maui goes to recover his remains from the bottom of the sea before going through the land of the dead to escort his soul into rest. Ultimately, the location of Shabuhm Shabuhm is revealed, and Maui goes head-to-head with the witch doctor at his Mojo Stronghold over the idol. Maui is triumphant, and as a sign of their gratitude, the islanders name their island after their hero, despite their misgivings that the name "Mallard" has little potential for attracting tourists.

By the 1996 holiday shopping season, the CD-based PlayStation and Saturn consoles had achieved a significant presence in the market, making third party publishers reluctant to spend money on expensive cartridges for consoles such as the Super NES. Because of this, Nintendo (which owned the factory where Super NES cartridges were made and thus could manufacture them more cheaply than third parties could) licensed the game from Disney Interactive Studios and published it in North America and Europe.

Maui Mallard received positive reviews. Shawn Smith wrote in Electronic Gaming Monthly that it "has all the qualities of a great side-scroller", Mark East of GameSpot hailed it as "quite possibly the best low-tech title to come out this year", and GamePro's Bonehead deemed it "well-crafted entertainment for novice and veteran gamers who are looking for great run-n-gun action." Critics praised the large, non-linear levels and detailed graphics, and said that the ability to change between detective and ninja personas makes the gameplay both deeper and more fun. However, critics found problems with the controls and East said the Windows version is too choppy in full screen mode.