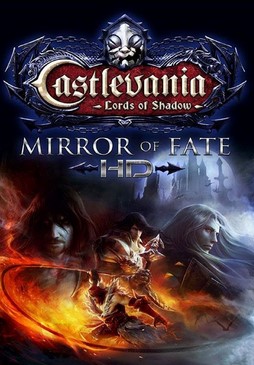 An updated version of the game titled Castlevania: Lords of Shadow – Mirror of Fate HD was released on October 25, 2013 for Xbox 360 on Xbox Live Arcade, on October 29, 2013 for PlayStation 3 on PlayStation Network, and on March 27, 2014 for Microsoft Windows through Steam.

Simon (voiced by Alec Newman) is the son of Trevor (voiced by Richard Madden) and Sypha Belmont. At the age of six, Simon’s parents were murdered by the forces of Dracula (voiced by Robert Carlyle) and Simon was lucky to escape with his own life. Lost and alone, he was found in the forest by some of the mountain people. Simon was taken in and raised amongst them. Simon never forgot what had happened to his parents and vowed to deliver vengeance one day upon those responsible. He trained hard and was extremely gifted in combat, yet life was hard for young Simon growing up. Always an outcast amongst the tribe, he developed a strong will and stubborn attitude that would always boil over into rage, and men soon came to fear him and his prowess in the arts of war. He fiercely protected a fragment of mirror given to him by his father and always wore it around his neck for safekeeping. Many years passed, yet the rage and yearning for revenge never left his heart. So one day he left the relative safety of the mountains and headed towards the land of his birth, to seek out the one they call the Dragon, to meet him face to face, and destroy him forever, little knowing that the curse of his family name would lead him into darkness and a terrible truth.