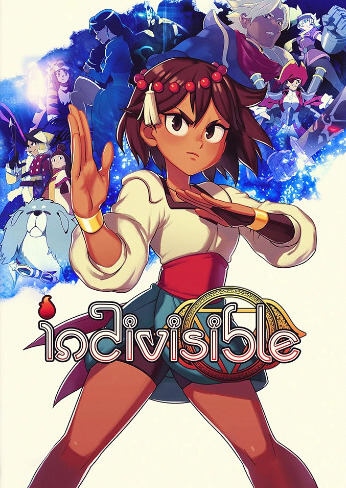 
Indivisible is an action role-playing-platform game developed by Lab Zero Games and published by 505 Games. The game was released in October 2019, with a Nintendo Switch release at a later date.

The game follows the story of Ajna (voiced by Tania Gunadi), a good-natured tomboy with a rebellious streak whose life is thrown into disarray when her village was burned to the ground by an army under the command of a warlord named Ravannanar. During the chaos, Ajna awakened a mysterious ability to absorb certain individuals known as Incarnations into her being. She embarks on a journey across the world quest to confront Ravannanar while learning the truth behind her mysterious powers. During her quest, she is joined by a variety of unique heroes, gaining new abilities to traverse different environments and defeat enemies encountered along the way.

Indivisible was announced by Lab Zero Games during their Skullgirls panel at the Anime Expo on July 2, 2015. According to the developer, the game's storyline was influenced by southeast Asian mythology and other cultures. It also features 2D hand-drawn animation by Lab Zero Games' artists. Composer Hiroki Kikuta, best known for his work on Secret of Mana, scored the game's soundtrack. The game features animation by Japanese anime studio Studio Trigger and American animation studio Titmouse, Inc., with the opening animation directed by Yoh Yoshinari of Little Witch Academia.

Lab Zero Games launched a crowdfunding campaign on Indiegogo on October 5, 2015, with a goal of US$1,500,000. A playable prototype of the game was released in tandem with the launch. If Lab Zero Games met or exceeded their goal, publisher 505 Games would contribute their remaining development budget. The campaign's initial 40-day contribution period faced relatively sluggish fundraising, earning approximately $764,000 by November 8, 2015. However, on November 13, 2015, the campaign was extended for an additional 20 days after the game received roughly US$963,000 in pledges, above Indiegogo's required 60% threshold. Following the extension, the goal was eventually reached on December 2, 2015. The game was released on October 8, 2019 in North America and released three days later in Europe.

Both the PlayStation 4 and PC versions of Indivisible received "generally favorable reviews" according to Metacritic.

Joe Juba of Game Informer praised the game's art style, animation, music and combat but criticized the backtracking and some other issues with the combat.

The game was nominated for "Character Design" and "Game, Original Role Playing" at the NAVGTR Awards.