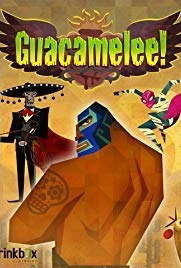 Guacamelee! is a metroidvania action platforming video game developed and published by DrinkBox Studios. The game was released for PlayStation 3 and PlayStation Vita in April 2013, and was later ported to Microsoft Windows in August 2013, and to OS X and Linux in February 2014. An enhanced edition was released for Wii U, Windows, PlayStation 4, Xbox One, and Xbox 360 in July 2014, and later on the Nintendo Switch in October 2018. The game draws its inspiration from traditional Mexican culture and folklore.

A sequel, Guacamelee! 2, was announced in October 2017 initially for the PlayStation 4, which includes four player co-operative gameplay. The sequel was released on August 21, 2018.

Guacamelee! is a hybrid 2D Metroidvania style action platform and brawler. Players control the luchador Juan and explore an open, non-linear world to complete the central story objectives while collecting necessary character upgrades and battling enemies. Coins collected from defeated enemies are used to buy new skills at shops, which also double as checkpoints. The game features drop-in co-op play, with the second player assuming the role of Tostada, Guardian of the Mask.

As players progress through the game, Juan breaks open "Choozo statues," a direct reference to Metroid's "Chozo statues," to gain new abilities. Some abilities give Juan new combat options with each move's color corresponding to similarly colored obstacles in the world, requiring Juan to learn specific moves before accessing certain areas. Other abilities include movement upgrades, such as a double jump, and the ability to cross between the world of the living and the world of the dead.

In a small village in Mexico, Juan Aguacate is a humble agave farmer. On the Dia de los Muertos (Day of the Dead) he’s going to meet with his childhood friend and love interest, El Presidente's Daughter, Lupita. An evil charro skeleton named Carlos Calaca attacks the village and kidnaps her. Juan is no match and is killed by Carlos. He is sent to the land of the dead, a parallel world where the dead reside. There, Juan finds mysterious luchador named Tostada. She gives Juan a mystical mask that transforms him into a powerful luchador and brings him back to the world of the living. The game then follows Juan's battle to rescue his beloved and to stop Calaca's plan to sacrifice her in a ritual that would unite the worlds of living and dead under his rule.

While he confronts X'tabay, the first of Calaca's lieutenants, he ends up transformed into a rooster and brought back to human form by another rooster with mysterious powers. After defeating X'tabay, she reforms, revealing that Calaca was once a great rodeo man who broke his arm just before an important competition, and sold his soul to the Devil to have it healed time enough for the competition, but just after winning, the Devil enacts his payment and drags him to hell, but with X'tabay's help he deceived the Devil by having him transformed into the same rooster who helped Juan, having helped him against Calaca in order to restore his power.

Juan gains power to confront and defeat the rest of Calaca's forces. Juan pursues Calaca to the altar where the ceremony is being held and defeats him, but does not arrive in time to save Lupita. In the normal ending, Juan returns to his village and lives his life in peace until reuniting with Lupita in the afterlife and the mask disappears. The true ending is attained by completing all of the hidden trials. Lupita is revived by the power of Juan's mask which breaks apart, and the two return together to the village where they get married.

Guacamelee! was selected as a nominee at Indiecade in August 2012. The game was also nominated for the 2013 Independent Games Festival for Excellence in Visual Art. IGN gave the game a 9.0, citing that the game's only misfire was the short length.