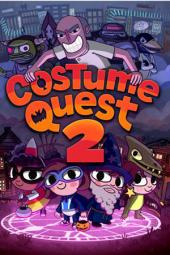 Costume Quest 2 is an action role-playing video game developed by Double Fine Productions and published by Midnight City. The sequel to Costume Quest (2010), Costume Quest 2 allows players to assume the identity of one of the two twin siblings, Wren or Reynold. Together with their friends, the group travels through the various in-game environments collecting candy and various costumes, in an attempt to thwart the plans of Dr. Orel White, who wishes to see Halloween banished forever. The game has an improved battle system and a time travel-based plotline. The downloadable-only title has been released on Microsoft Windows, OS X, Linux, PlayStation 3, PlayStation 4, Xbox 360, Xbox One, and Wii U.

Costume Quest 2 is a role-playing video game, in which the player assumes the role of one of two twin siblings: Wren and Reynold. They explore their neighborhood on Halloween and can fight monsters. Much like the first Costume Quest, the protagonists of the game will become bigger and more realistic versions of their costumed selves. With this, comes new abilities that the children have while fighting the antagonist. For example, a child wearing an Egyptian costume will become Anubis, while another girl could be dressed as a werewolf, and become a wolf that foams at the mouth. Unlike the first game, there is a new feature that allows the children to go through time to complete each quest.

The game takes place on Halloween night. Fraternal twin siblings Wren and Reynold, and their cast of friends are out to save Halloween from the evil Dr. Orel White. The nefarious dentist teams up with a powerful time wizard, and together, they release the Grubbins, Orc-like creatures, into the human world, in hopes of ridding Halloween forever. At the beginning of the game, a portal opens up, and Wren and Reynold's friends (who are now adults with kids of their own) step out, explaining that they are from the future where Halloween has been outlawed and Dr. Orel White has basically taken over the world. Wren and Reynold go back to the future with their friends, and it's a race against the clock on Halloween night to try and stop Dr. White for good.

Costume Quest 2 received positive scores from reviewers, who stated that the game's new methods and abilities added more charm to the game than the original. In their review, IGN stated, "Costume Quest 2's combat and story are both surprisingly good for an RPG that concludes in roughly a half-dozen hours. Navigation is iffy, and the healing system is a bit broken even after a major revision, but its humor and personality shine through to make this a good Halloween bounty."