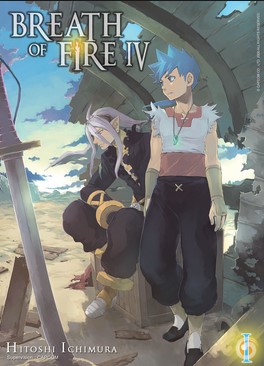 Breath of Fire IVa is a role-playing video game developed by Capcom, and is the fourth game in the Breath of Fire series. It was originally released for the PlayStation home console in Japan and North America in 2000, and Europe in 2001. The game was later ported to Windows-based PCs in Europe and Japan in 2003.

Just as in previous games of the series, Breath of Fire IV follows the adventures of a young man named Ryu, who has the power to transform into powerful dragons. The Ryu in this game must team up with several other skilled warriors to combat an awakened immortal emperor from ascending to godhood and destroying the world of man. Like Breath of Fire III, the game utilizes a mix of two and three-dimensional computer graphics and turn-based battle sequences.

Breath of Fire IV is a traditional role-playing video game with an overhead, isometric viewpoint. The game's camera can be manually rotated by the player up to a full 360 degrees in some instances, though unlike Breath of Fire III it cannot be tilted up or down. The game environment is rendered in full 3D, while characters are presented as two-dimensional hand-drawn sprites. While moving about the world, players can interact with computer-controlled characters and objects, gain knowledge about the world around them, and gather clues on how to advance the story. Each playable character is given a special "field skill" that can be used to destroy obstacles or solve puzzles outside of battles, which occur randomly in hostile areas or dungeons.

The "Master System" from Breath of Fire III returns, allowing players to customize each character by having them apprentice under different masters found throughout the world. Under their guidance, these characters may gain new skills and special statistic increases by fulfilling certain tasks, such as participating in a certain number of battles, or finding specific items. The fishing mini-game common to the rest of the series also returns, along with the village-building Faerie Town feature from the previous title that allows players to construct a special village that opens new features.

Battles take place with teams of three characters against any number of enemy opponents. During these combat sequences, the player can choose which characters will perform an action in any order, as well as switch in any available reserve characters from the back row. While positioned in the back row, a character may not participate in battle, but may regain lost health or magic every combat round, as well as become unaffected by any attacks. Battles end when either all enemies are defeated or all characters in a player's front row are out of health. Each battle yields experience points that go toward earning levels for each character, which in turn grants increased statistics and new skills.

New to Breath of Fire IV is the Combo System, which allows certain spells or skills to be cast in a specific order to gain bonus damage or other effects. Casting two ice spells in sequence, for example, will produce a stronger ice attack, while a fire spell followed by a wind spell will create an explosion-based attack. Combos may also automatically occur in single attacks that have more than one effect.

The principal characters of Breath of Fire IV were designed by series artist Tatsuya Yoshikawa, and consist of Ryu and his companions, each with their own individual skills and personality traits carry the story forward. Ryu (voiced by Kappei Yamaguchi) is an amnesic young man with the mysterious ability to transform into powerful dragons, with his "other half" being Fou-Lu (voiced by Isshin Chiba), the principal antagonist and founder of the Fou Empire centuries ago with similar abilities, yet a much more malevolent personality. Aiding Ryu on his quest to confront Fou-Lu are several other heroes including Nina (voiced by Kyoko Hikami), a winged magic-user and the reigning princess of the Kingdom of Wyndia; Cray (voiced by Isshin Chiba), a burly member of the cat-like Woren tribe who wields a large wooden post and holds romantic feelings for Nina's sister, Elina; Ershin (Master in the Japanese version, voiced by Inuko Inuyama), an enigmatic robot-like armor who speaks in third-person; Scias (voiced by Unshō Ishizuka), a lanky mercenary and swordsman from the dog-like Grassrunner clan who lives for money; and Ursula (voiced by Kumiko Watanabe), prideful granddaughter of a military commander with kitsune-like features and skilled with guns.

Primary supporting characters include Yohm, a general from the modern Fou Imperial Army with the ability to summon monsters to his aid who see Fou-Lu as a threat to the world; Rasso, an elitist company commander dispatched to the Eastern Kingdoms to search for Ryu, Fou-Lu's key to obtaining his lost godhood; Yuna, a cruel geneticist and occultist who participates in horrific acts of genetic manipulation with dark magic; and Kahn, a muscle-bound chauvinist and comic-relief villain who constantly encounters Ryu's party.