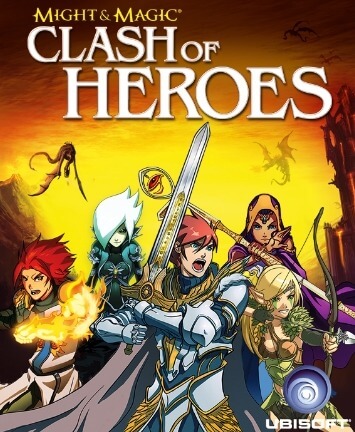 Might & Magic: Clash of Heroes is a puzzle role-playing adventure video game in the Might and Magic franchise, developed for the Nintendo DS by Capybara Games and published by Ubisoft. It was first announced in May 2009, and released on December 1, 2009. In 2011, a downloadable high definition version was developed for the PlayStation 3, Xbox 360 and Microsoft Windows. Android and iOS ports were developed in 2013.

Previews of the title likened its gameplay model to those of Puzzle Quest and Critter Crunch. Borrowing elements from the Heroes of Might and Magic franchise, it combines elements of the role-playing, turn-based strategy and puzzle video game genres, allowing players to embark on story-based and optional quests while employing army recruitment and resource management. Five of the eight playable factions featured in Heroes of Might and Magic V – the Haven, Inferno, Sylvan, Academy and Necropolis – comprise the game's forces, though their troop lineups are not replicated from Heroes V. Instead, armies are made up of an unlimited number of faction-specific basic troops, as well as a finite number of larger "elite" units. Each faction has three types of basic troops, and five types of more advanced troops, with players selecting from these to form their individual army compositions.

The player controls individual heroes representative of each faction, each of whom act as avatars in alternating exploration and battle phases, growing in experience and obtaining new abilities as the game progresses. The game's producers described battles as the center of the game, and these battles are turn-based. Battles take place using two separate grids of troops, with enemy troops being shown on the top screen, while friendly troops are shown on the bottom screen. Each turn, players have a number of moves (generally three) with which to move individual units around on the grid (battlefield) in an effort to stack similarly colored units vertically. When the correct number of units of the same color are stacked, the units begin charging for an attack which will execute some number of turns later. If the charging units are not destroyed prior to the beginning of their attack, the attack launches vertically towards the opponent's army, interacting with any enemy units which are in the way, and possibly striking the enemy leader or hero as well.

Equippable artifacts, some returning from Heroes V, are also involved in gameplay; these modify troop or hero abilities during combat. Lastly, a multiplayer mode is also included, featuring two playable heroes in DS Download Play mode, and all ten heroes in DS Wireless Play mode. The game has some different features from other clash games

The game is the third title set in the series' Ubisoft continuity, and acts as a prequel to Heroes of Might and Magic V, taking place in the fictional world of Ashan prior to the events of the game (producers Erwan Le Breton and Romain de Waubert have noted it as 40 years before the cycle of Heroes V and Dark Messiah of Might and Magic, averaging at 946 YSD in the timeline).

The game's story mode centers on its five main protagonists: Godric, Aidan, Anwen, Nadia and Fiona, who command knights, demons, elves, wizards and necromancers respectively. Godric and Anwen previously appeared as playable characters in Heroes V, while further returning characters shown in screenshots include Cyrus, Findan and Markal. The protagonists have been described as five lost children whose lives are shattered by "a mysterious Demon Lord with very sinister motives". This demon lord turns out to be Azh Rafir, Nadia's father, who had devised a mad scheme to use a powerful artifact known as the Blade of Binding to open the gates to the demon world of Sheogh and drown Ashan in chaos. He is shown to worship Urgash, the dragon of chaos, in Fiona's story. It is also shown, in Aidan's story, that Aidan had unknowingly taken the Blade of Binding. After the revelation that her own father had broken her life and those of her friends, a heartbroken Nadia decides to fight Azh Rafir in his demon lord form in the story's climax. After vanquishing him, she destroys the Blade of Binding and finally derails his scheme, bringing peace to Ashan.

Reviews have been generally positive, with IGN awarding the game a Best of E3 2009 nomination for Best DS Strategy Game. They would later go on to give it an 8.9 out of 10. It was also ranked as the fifth-best Nintendo DS game released in 2009 by Metacritic. Official Nintendo Magazine gave the game a score of 90% praising its tactical play and reward system however, criticizing it for being too generic.

(0) Comments on "Might & Magic: Clash of Heroes Full Version"