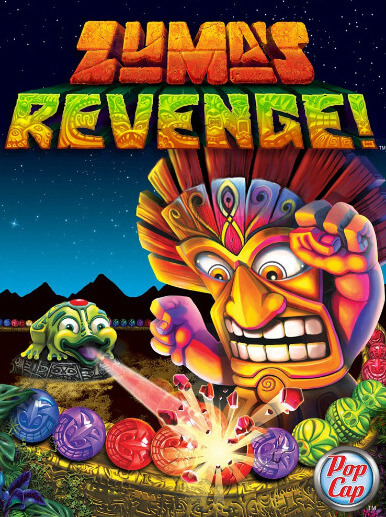 
Zuma's Revenge! is a tile-matching puzzle video game developed and published by PopCap Games. It was released for Microsoft Windows and Mac OS X on September 15, 2009 as a sequel to the earlier Zuma, and was later ported to Windows Phone. It features high-definition graphics, new levels and 'power-ups,' several new features, as well as boss battles. On February 22, 2011, a version was introduced for Nintendo DS which features daily challenges, versus mode and achievements.

As in Zuma, the main objective of Zuma's Revenge! is to clear strings of rolling balls, or 'stones', by matching balls of the same color. Players move a ball-shooting frog which always points in the direction of the mouse to aim and fire balls at these strings. When three or more balls of the same color match together, they are cleared from the playfield. This clearing creates gaps through which a player may shoot more balls at nearby strings, target bonus fruit, and 'power-up' stones. Gaps automatically close if the balls at either end of the gap are (or become) the same color, potentially creating chain reaction matching and clearing as new sets of three or more are formed.

The strings of balls constantly roll along their tracks toward a skull emblem at the end. Should they reach the emblem, the player loses a life, and the game is over when the player has lost all of his or her lives. However, unlike in the original Zuma in which regardless of stage, they are allowed to play stage one of the temple again, when the player gets a game over, they will start again at the checkpoint (stage one of an area if the player loses before the mid level and stage five if the same situation happens in stages six to ten). The strings are always "pushed" by the last ball in the string, so any balls not connected to the rearmost string do not move on their own.

Periodically, random balls display power-ups which the player may collect by destroying the ball. These include a visual guide to show where a ball will land when shot, power-ups that slow down or reverse the direction of the string, a three-way cannon that blasts through all layers of balls, a laser that can destroy single balls, a bomb, and a lightning power-up which destroys all balls of a specific color.

Zuma's Revenge! introduces three types of levels that are new to the series. Some levels feature two lily pads that the frog can jump between, while other levels set the frog on a horizontal or vertical track and enable it to slide side-to-side or up-and-down rather than rotate to aim. There are also boss levels where the player has to shoot balls towards the enemies to reduce their hit points while simultaneously preventing the ball string(s) from reaching the skull emblem. The enemies in turn shoot projectiles that will induce a certain gimmick if they hit the player. These levels have an unlimited number of lives, so if any single ball reaches the emblem, the player will simply restart the level, since there is no game over in boss levels.

The game features four game modes. In Adventure mode, the player progresses through a Polynesian-style island ruled by the angry god Zhaka Mu. Every five levels, the player is awarded a checkpoint at which he or she can restart the game if all lives are lost. At the end of each island area, the player encounters a tiki god and must face the god in a boss battle. Clearing Adventure mode for the first time unlocks the Heroic Frog and Iron Frog modes. Gameplay of the Heroic Frog is the same as Adventure, but it is considerably more difficult. In Iron Frog, the player has to progress through ten levels with only one life and the mode is an even more difficult than Heroic Frog.

In each mode except Challenge mode, the player must reach a general point goal to achieve "Zuma", at which point the level stops adding balls to the string(s). The player must then clear all of the remaining balls from the playfield to move on to the next level. In Challenge mode, the player has three minutes to score as many points as possible, collecting power-ups which increase his or her score multiplier along the way.