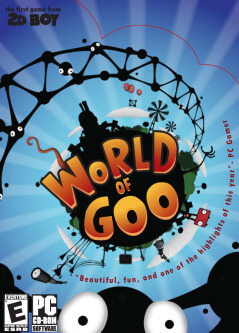 World of Goo is a puzzle video game developed and published by independent game developer 2D Boy. The game was released on Microsoft Windows and Wii platforms on October 13, 2008, with releases on Nintendo Switch, Mac OS X, Linux, and various mobile devices in subsequent years.

The game was nominated for numerous awards—the Seumas McNally Grand Prize, Design Innovation Award, and Technical Excellence—at the Independent Games Festival, and has gone on to win several other gaming awards. The game was critically acclaimed and became an example of a commercially successful indie game.

The game is built around the idea of creating large structures using balls of goo. The game is divided into five chapters, each containing several levels. Each level has its own graphic and musical theme, giving it unique atmosphere. There is also a bonus meta-game called World of Goo Corporation, where the objective is to build the highest tower using goo balls which the player collected through the course of the game. Players from all over the world can compete, as the height of the tower and number of goo balls used are being constantly uploaded to the 2D Boy server.

The main objective of the game is to get a requisite number of goo balls to a pipe designed to represent the exit. In order to do so, the player must use the goo balls to construct bridges, towers, and other structures to overcome gravity and various terrain difficulties such as chasms, hills, spikes, windmills, or cliffs. There are several types of goo balls in the game, each of which has unique properties. The player must exploit combinations of these goo balls in order to complete each level. Extra goos recovered in the pipe are pumped through to the World of Goo Corporation, a sandbox area where the objective is to compete with other players worldwide by building the tallest tower possible. Players can also try to achieve the "Obsessive Completion Distinction Flag" for each level by completing the level under more stringent criteria, such as collecting a larger number of Goo balls, finishing under a set amount of time or using as few moves as possible.

The WiiWare version includes multiplayer with up to four people on the same Wii. This facility is also available, albeit unsupported, in the Linux port.

World of Goo is split up into four chapters and an epilogue, each containing a number of levels. The chapters are set over the course of one year in the World of Goo. Each chapter takes place over one season, beginning in the start of summer, and ending at the end of spring the next year.note  The 4th chapter is seasonless, and is set in a virtual world. Levels and chapters in the game are interspersed with cut scenes.

An additional 'chapter' selectable from the main menu is the World Of Goo Corporation. Goos collected above and beyond the required amount to pass a level are piped out of each of the played levels to here. Starting from just a single triangle of Goo, the aim is to build the highest possible tower. The Goos in the World of Goo Corporation are unique in that they can be repositioned like Ivy Goos but are black and can only form two connections at once like Common Goos.

In the World of Goo Corporation, towers built by other players of the game are represented by clouds bearing the player's name, nationality and height of the tower, including details on the total number of balls collected by the player and how many were used in constructing their tower. The altitude of each cloud represents the height of that player's tower. An online leaderboard charts the heights of the top 50 towers, as well as the top 10 players for each level of the game.

There are a total of 48 levels in the game, including World of Goo Corporation.

In an interview the developers stated that the retail version released in Europe would receive an additional sixth chapter, set on the Moon. Few details were disclosed, but reportedly this chapter would have featured a freeform sandbox mode, similar to that of the World of Goo Corporation. This addition was canceled for Wii when 2D Boy announced they were releasing the game on WiiWare in Europe.

The story is told primarily through cut scenes and signs encountered throughout the game, which were left by an unseen character known as the Sign Painter.

Initially, pipes appear throughout the land, waking up many sleeping Goo Balls who have gone undisturbed until this, as they are filled with a childlike sense of curiosity and naivety they build themselves towards the pipes. Upon reaching the pipe entrance, the Goo Balls are sucked by the pipe system into the "World of Goo Corporation" main building where they are processed into many products, for example an energy drink. The excess Goo Balls are left outside the Corporation headquarters where they together begin to build a giant tower. At the end of the first chapter, some Goo Balls escape from a Corporation building by attaching themselves to eyeballs which have the ability to fly. The chapter ends with the Goo Balls "seeing far away new lands".

In the second chapter, more pipes appear in a hostile wasteland where World of Goo Corporation turns out to be searching for a new power source due to wind power not being sufficient anymore. However, the location and appearance of the power source was forgotten, because in the past, it stopped producing electricity.note  A new Goo Ball is introduced, which is ground up by the Corporation into a facial cream. Near the end of the chapter, the power plant, which looks like a giant woman, is discovered. It is revealed that for many years, its remarkably powerful "beauty juice" powered the world. Yet with age, her beauty and consequently her electric output began to die. However, unrefined beauty goo was injected directly into her forehead, as to restore her youthful beauty once more. At the expense of her ability to move her face, power was restored to the entire world. With this newfound energy, the World of Goo Corporation was able to open a factory, aiming to complete their most compelling new product.

During the third chapter it is said that the Corporation is developing a mysterious "Product Z." It eventually turns out that the mysterious Product Z is actually the third dimension (Product Z is the Z axis in mathematics). This causes much commotion amongst the general population who cannot see where anything is now. World of Goo Corporation tells them to contact tech support in the information superhighway after mankind, all animal and plant life becomes rendered "incompatible with the world".