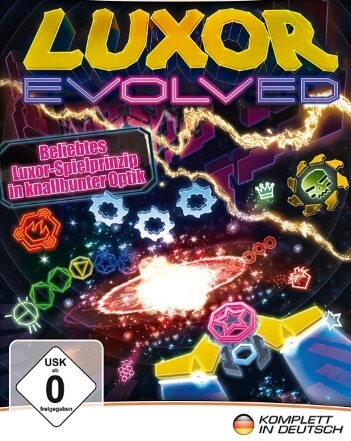 Luxor Evolved is a match-3 puzzle game developed in 2012 by MumboJumbo.

The objective of Luxor Evolved is similar to that of other marble-popping matching games such as PopCap Games' Zuma. Typical of the Luxor series, each stage includes a series of scarabs pushing a line of marbles along a path toward an open pyramid. The player is tasked with rescuing the marbles, using a marble-launching "winged scarab" that moves across the bottom of the screen, by matching a chain of three or more of the same color, or by using various powerups, which are dispensed randomly when the marbles are rescued. If any marble completely enters the holes, the player loses a life.

Luxor Evolved introduces gameplay and style which is a notable departure from the series' norm. The gameplay is faster paced than in previous installments. Rather than resetting the stage if the player loses a life, the chains of marbles are reversed, leaving some remaining; losing a life on a survival stage ends the stage immediately. Powerups are unlocked and upgraded by earning enough score or in some cases, beating a boss. Among the powerups are "super powerups" which the player unlocks after beating the first, third, and sixth bosses. Upon unlocking a super powerup, emblems periodically appear and fill up a meter corresponding to that powerup, activating it automatically when the meter is topped off. However, the super powerup can be activated by shooting 6 shards by opening a gap out of spheres.

The graphics of Evolved are reminiscent of the vector graphics commonly used in video games of the late 70s and early 80s.

Luxor Evolved includes multiple different types of stages: classic, survival, bonus, secret, and boss. Many levels are mirrored or reoriented versions of stages from previous Luxor games. If the player outlasts the timer on a survival stage, they are rewarded with a bonus stage where they must clear all the marbles using a certain powerup differing between special stages. At the end of each group of stages, the player is faced with a boss stage where they must destroy a giant robot named after an ancient Egyptian god, such as "Mecha-Sekhmet" or "Mecha-Horus". If the player collects enough falling treasure, they will immediately unlock a secret stage to beat in addition to the normal stages. The player is told how much treasure to collect in between stages. The sphere is constellated as an octagon, which adds random shapes: Star Blue color, Hexagon Red color, Square Green color, Triangle Yellow color, Dark triangle Purple color, 4-shaped Star White color, Dark star Black color, Light Plus Turquoise color and Hot Plus Orange color.

Evolved features numerous references to many video game tropes of the time. All of the secret stages pay homage to classic arcade games such as Asteroids and Pac-Man. The pause menu features a Qix that flies across the menu screen. The game's ending sequence is a simulation of a kill screen and error handler, "rebooting" into a playable credit roll thereafter.