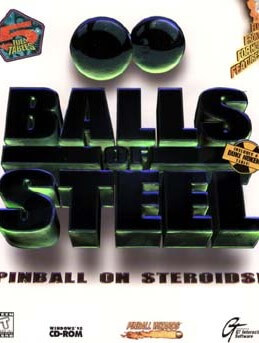 
Balls of Steel is a pinball computer game developed by Wildfire Studios and released on December 12, 1997. It is the only game to be published under the Pinball Wizards label, a division of Apogee Software (today known as 3D Realms).

When the game was originally released, it was possible to upload high scores to the WorldScores server, for a global ranking. This feature has since been discontinued.

Another table, Devil's Island, was dropped from the game when Wildfire was given the opportunity by Apogee to include a Duke Nukem table. Devil's Island was later released as a standalone game.