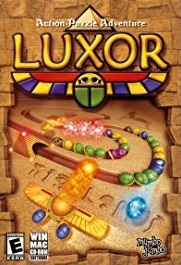 Luxor is a game and series of tile-matching action puzzle video games, developed by MumboJumbo and Published by Wamoc and MumboJumbo LLC, with the initial release in 2005. The first sequel to this game was Luxor 2, which was released in 2006 and included new gameplay, levels and bonus. After that came Luxor 3 (Luxor: Reverse to Egypt), which featured seven gameplay modes and improved graphics. It was followed by Luxor: Quest for the Afterlife.

Luxor’s gameplay is similar to the games Marble Lines, Puzz Loop, and Zuma, in that it challenges the user to eliminate colored magical spheres by causing three or more spheres of the same color to collide. When spheres are eliminated, nearby spheres which now form a segment of three or more of the same color will also explode in a chain reaction.

During gameplay, the on-screen spheres continuously move forward, pushed themselves by additional small scarabs. If any sphere reaches the player's pyramid, he or she loses a life and is forced to restart the level. If the player succeeds in eliminating a certain number of spheres without this occurring, new spheres cease to arrive and the level can be completed by removing those which remain.

After competitor Codeminion released their game StoneLoops! of Jurassica for iPhone, MumboJumbo sent a complaint to Apple with the request to remove the game from the Apple App Store. According to MumboJumbo the game has many similarities with the Luxor-series which could confuse customers. Apple accepted the complaint and the game was removed.