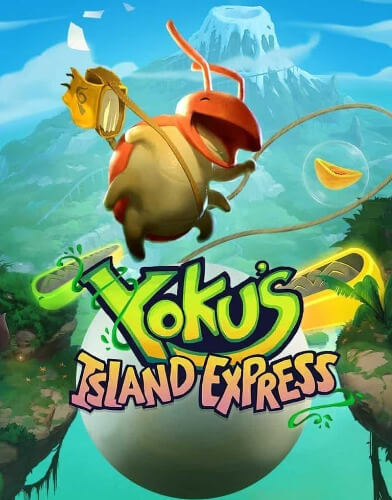 Yoku's Island Express is a platforming pinball adventure video game developed by Swedish studio Villa Gorilla and published by Team17. The studio's debut project, the game was released in 2018 for Nintendo Switch, Microsoft Windows, PlayStation 4 and Xbox One.

In Yoku's Island Express, players control Yoku, a dung beetle, who becomes a postmaster as he arrives at a fictional island of Mokumana. The player is tasked with saving the island from a looming calamity, as the island's deity figure is attacked.

The gameplay of Yoku's Island Express consists mainly of side-scrolling platforming. Players can move Yoku left and right; however, unlike most platform games, in Yoku's Island Express the character controlled by the player cannot jump. Instead, players manipulate pinball paddles (flippers) to push the ball attached to Yoku, who is dragged behind it. Yoku's Island Express takes place on a Metroidvania-style open-world island with many bumpers, tracks and ramps to utilise the pinball mechanics.

Villa Gorilla was founded in Stockholm, Sweden in 2013 by Jens Andersson and Mattias Snygg. They wanted to make a game in one year, choosing to "make a game about a ball" as they did not have an animator. Eventually, they started calling their project an "open-world pinball game".

Developers created a proprietary game engine suited for the needs of their project.

Reviewers criticised the occasional retreading or backtracking in the game's world as sometimes being tedious or even causing frustration. Jon Mundy of Nintendo Life stated that "figuring out exactly how to get from A to B in the early to mid-game stretch can feel like groping around in the dark". Critics who reviewed the Nintendo Switch version complained about the in-game map being hard to read in handheld mode.