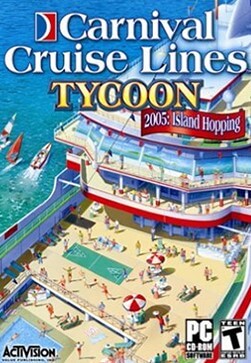 Carnival Cruise Lines Tycoon 2005: Island Hopping is a 2004 cruise-line business simulation game inspired by the cruise line Carnival Cruise Lines and developed by Deck13 under the Artex Software label, and published by Activision Value. The primary objective of the game is to offer cruise line services to customers. The game itself offers what would be expected from a typical tycoon game. Users are in command of the ship and are responsible for the task of purchasing buildings and designing the layout. While gaining popularity, users also have an advantage to buy more ships and have a large fleet of ships going to exotic destinations. The game included Carnival logos and the entertainment and lounges available to add to the ships were named as per Carnival Cruise Lines standards. The ships that can be worked with in the game are: Sunshine (a fictional cruise ferry only accessible as the first ship in the career mode), Carnival Celebration, Carnival Paradise, Carnival Legend, and the Carnival Conquest.