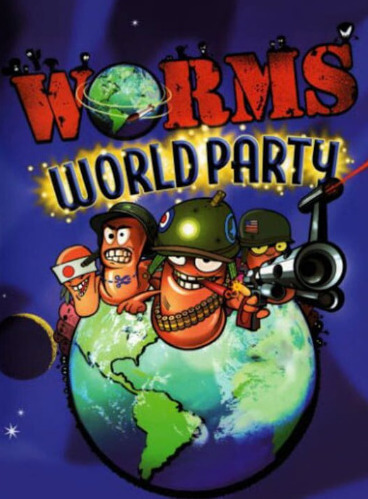 Worms World Party is a 2D artillery turn-based tactics video game. It was developed by Team17 as the seventh game in the Worms series, and was released in 2001. It was the last 2D Worms game before the series' three-year stint in 3D, starting with Worms 3D.

There was a plan to make Worms Armageddon and Worms World Party cross-compatible when Worms Armageddon reached version 4.0. Since the development of new Armageddon patches was quite slow, it would take quite a long time until that could happen.

Like its predecessors, Worms World Party is a side-scrolling video game involving controlling a team of worms and using a collection of weaponry to eliminate the opposing team(s). The worms can walk and jump around and use tools such as the ninja rope and parachute to move to otherwise unreachable locations.

The worms have an arsenal of dozens of weapons, ranging from longbows to bazookas and from fireball to Holy Hand Grenades. There are also an array of special weapons, such as Armageddon (meteor shower) or the infamous Concrete Donkey. Some of these weapons are present in the worms' initial arsenal while others can be collected from randomly appearing crates during the game. For some weapons, such as grenades, holding the launching key longer shoots them further. The landscape can be deformed with any weapon, forcing the players to adapt to changing environments. Also, in addition to the nature-made obstacles, the maps may contain land mines which explode when a worm comes close to one, and barrels which explode when shot, spreading out some burning napalm. These often lead to very technical combinations where, for example, a worm is first hit with a grenade and is then thrown against a mine which sets off another worm, which hits a third worm who slips into the water.

The image illustrates a match between three teams of worms in a pirate-themed map. Over their heads the worms have their names and hit points. The color of the text indicates the team the worm belongs to. Each team can be customized by the player's will, including the language the worms speak and the headstone that is left when a worm dies. The worms can also be drowned, in which case no headstone is left. In the bottom of the screen the remaining time and the wind speed are shown. When the time runs out, the water level starts to raise on each turn, drowning the worms at the lowest points of the map (this is called Sudden Death). The wind speed affects some weapons. Failing to account for it may turn a missile back into the worm who launched it.

The player can set up many options and make maps you can play on prior to battle to tailor the experience. There are also single-player and multiplayer missions available to help refine the player's skills with the various weapons and utilities.

The Dreamcast, PC, Game Boy Advance and N-Gage versions received "generally favorable reviews" according to the review aggregation website Metacritic. The main complaint in the individual reviews is that Worms World Party could have been just an expansion pack to Worms Armageddon.