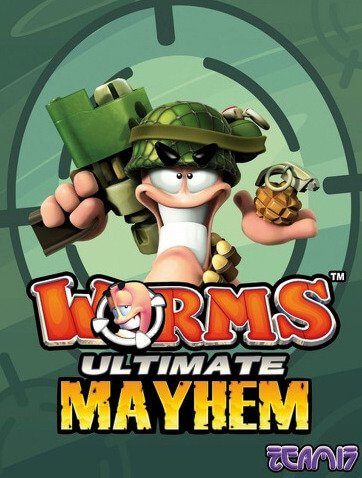 Worms Ultimate Mayhem is a 3D artillery turn-based tactics video game developed by Team17. The game is a re-release of Worms 4: Mayhem with improved graphics. It includes the campaign from Worms 3D, adding customized looks to enemies in said campaign. It features extra maps, new voice acting by Guy Harris and other gameplay fixes such as reworked camera controls. The game features turn-based gameplay, a single-player campaign, and both local and online multiplayer.

Unlike most of the previous 2D Worms games, Worms Ultimate Mayhem features a 3D, turn-based artillery strategy that allows player to move freely rather from left and right. In the game lobby, players are able to choose from a wide variety of different weapons and use them when the game starts. At the start of the game each player is able to control four worms, due to the game turned-base nature, each player control one worm at a time with a set time limit; when the time limit expires or when the worm fires a weapon, the player's turn will end and the opponent will start his turn. The objective of the game is to eliminate all of the enemy team worms. There are two ways that a worm can be eliminated. The simplest way is to deplete the worm of its health, that can be done by choosing a weapon, aiming it at the enemy worm, and firing at the opposing team worm. The second way is to knock the worm out of the platform; some weapons provide the ability to push or knock back the opposing worm. Once a worm is eliminated, it cannot be brought back to life and once all four of a player's worms are eliminated the game will end. The team with worms left standing is the winner.

Online gameplay allows up to four players to choose from a few different game modes. Game mode such as "Statue Defend", "Homeland", and "Death Match". The objective in Statue Defend is to go into enemy base and destroy a bird statue using weapon. In this game mode, once a worm is eliminated, it will be summoned back to life in the player's base and the only way to win is by killing off the enemy bird statue. In Homeland, each player is given a home base and the objective is to either destroy the enemy home base or eliminate all of the enemy worms; the player that is left standing is declared the winner. In Deathmatch, the objective is for each player to eliminate all of the opponent team worms.

Offline gameplay allow players to test their skill against AI opponent through a set of game mode. Playing through the different game mode will give player a chance to familiarize themselves with the environment and the surrounding. Offline gameplay also features a story mode, in which Worms Ultimate Mayhem offers 25 levels, each level consists of a cut-scene and a game mode for players to complete.

There are list of weapons to choose from in Worms Ultimate Mayhem ranging from the classic fire punch, baseball bat, and concrete donkey to the latest sentry gun, poison arrow, and Icarus potion.

Players are able to customize their worm character with different accessories to show off their unique style and personality. Players can also customize their weapon; creating something new and powerful to face off enemy worms.