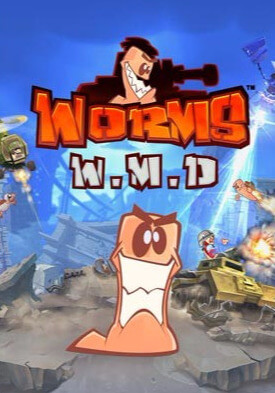 Worms W.M.D is a 2D artillery turn-based tactics video game in the Worms series, released on 23 August 2016. Its gameplay resembles that of Worms Armageddon more than subsequent installments, while adding new features that range from interactive vehicles such as tanks, to buildings that the worms can enter for protection. It is also notable for being the first major redesign the worm characters have received since Worms 3D.

Worms W.M.D aims to replicate the gameplay of Worms Armageddon, with graphics and game design returned to a 2D interface. Gameplay elements from previous installments, such as classes, water physics and dynamic objects, are removed. A new feature includes the ability to craft weapons by gathering parts from special crates or by disassembling weapons. New weapons and utilities are added such as a phone battery and a bazooka that creates fiery explosions; classic weapons such as the Holy Hand Grenade return as well. Also returning from worms forts:under siege are buildings that the worms can enter to a tactical advantage. Worms can make use of these buildings as a cover from enemy fire or to launch a surprise attack on enemy worms.

For the first time, vehicles and stationary turrets are introduced, which can alter gameplay in many ways. Worms can enter vehicles such as tanks, helicopters and Mechs that are available from the start or can be spawned by airdrops. Stationary guns, such as machine gun, mortar, flamethrower and sniper, can be used for greater damage within line of sight. Both vehicles and turrets can take damage and become unusable if they take too much damage, after which they are destroyed.

On 12 July 2016, as a pre-order bonus, Team17 announced an expansion pack called Worms W.M.D All-Stars, featuring additional content themed after various other video games, such as the Octane Battle Car from Rocket League, several masks for worm customisation, various thematic weapons and additional missions. On 15 November 2016, All-Stars was released for free to all players.

Worms W.M.D received "generally positive" reviews, according to video game review aggregator Metacritic. DarkZero gave the Switch version of the game 8 out of 10 praising its good selection of offline missions and rewarding training.