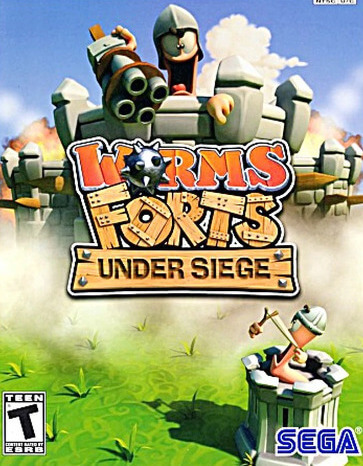 Worms Forts: Under Siege is a 3D artillery tactical game. It was designed by Team17. Like the previous Worms game, it is in complete 3D and showcases new features, such as buildings. While the primary method of victory is to destroy the opposing team, victory can also be achieved by destroying the opposing Stronghold, the most important building in the game. It is the second game in the series to carry both a T rating from the ESRB and a 3+ rating from PEGI.

Players can build a variety of structures or buildings to increase efficiency. Players can also fire from these structures, and buildings can be unlocked based on players' performance. Different structures can provide different benefits; while most provide upgraded buildings, some provide extra bonuses such as generating weapons crates that can be collected for more weapons.

Egyptian: The Egyptian story focuses on a worm called Seth, who tries to raise an army of the dead to battle the Pharaoh.

Greek: The Greek story focuses on the war against Troy and a worm called Helen.

Oriental: The Oriental story focuses on the Mongol invasions, with names beginning with Rise of and Fall of. The last map shows a destroyed Mongol ship, a reference to the tsunami which destroyed the Mongol fleets.

Medieval: The Medieval story focuses on King Arthur and how he became king. The last map is called "Mordred and Morgana", a reference to the last battle, in which Arthur was fatally wounded.