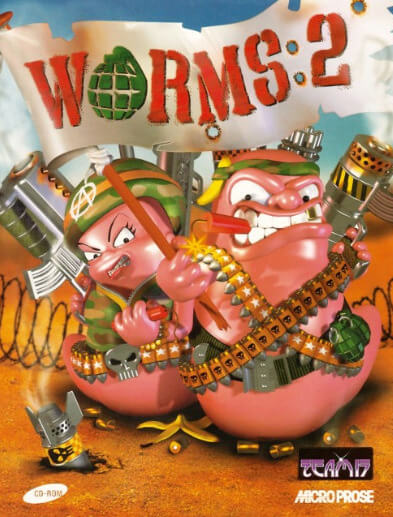 Worms 2 is a 2D artillery tactical game developed by Team17 as part of the Worms series. The game was released in 1997, and re-released in 2012 on GOG.com. The player controls a team of up to eight worms in combat against opposing teams. The game features the same premise as the original game, and involves controlling an army of worms and using a collection of eclectic weaponry such as bazookas, dynamite, grenades, cluster bombs, homing missiles, banana bombs and the holy hand grenade. These are among the basic weapons used to eliminate the opposing teams of worms. It features a completely new graphics system, going for a cartoon style, which has remained for the rest of the series.

Gameplay is turn-based, with each team moving in a randomly determined sequence across two-dimensional terrain. During a single turn, a team can only move one of its worms. Worms can crawl and jump, as well as swing by ninja-rope, parachute, teleport, and bungee when the appropriate items are available. The objective of a traditional match or campaign mission is to defeat all opposing teams by killing their worms. Each worm begins the round with a specific amount of health which is predefined by the chosen game options or by scripting in campaign levels. When hit with a weapon, the worm will lose health depending on the power of the weapon and the directness of the hit. A worm can be killed either by having its health reduced to zero or being knocked into the water around and below the level.

Worms 2 was the first game in the Worms series to feature completely integrated local and online TCP/IP multiplayer in addition to the regular hotseat mode, which allows up to 6 players to compete. Online play is disabled in the GOG.com digital release of the game.

The game includes a wide variety of weapons, including melee, projectile, and explosive weapons, as well as air-strike-based attacks. Some are based on real-life arms, such as the shotgun, bazooka, and hand grenade. Others are more fanciful and cartoonish, such as the sheep, which serves as a mobile explosive. In a normal match, all teams begin with the same weapons, based on the chosen weapon set. Some weapons may only be available after a certain number of turns have passed. Depending on game options, additional weapons, such as mortars or cluster grenades, may randomly fall onto the terrain in air-dropped crates. On rare occasions super weapons will fall in weapon crates.

Worms 2 includes both weapon and option editors, each offering a very high level of control over many game-play and weapon settings. Option settings include worm retreat time, wind strength, fall damage and sudden death land sink rate. Weapon settings include how many turns must pass before the weapon becomes available, the number of bullets fired per 'shot', blast power, explosion bias and bullet spread.

The game offers players the ability to create their own custom teams. Each team has its own name and includes eight individually named worms. The player can also change the team's voice set. The game includes a random level generator and a basic level editor which allows the user to create the shape of the level with a brush.

In 1998, PC Gamer declared it the 30th-best computer game ever released, and the editors called it "a funny, original, and thoroughly addictive combination of action and strategy".

The editors of PC Gamer US named Worms 2 the best turn-based strategy game of 1998. They wrote, "Worms 2 serves as evidence that sometimes a genre's salvation can be found in the unlikeliest of places." It was a finalist in the magazine's "The Best Multi-Player Game" category, which ultimately went to Tom Clancy's Rainbow Six.