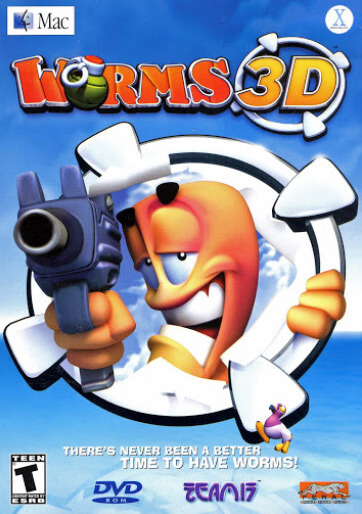 Worms 3D is a 3D artillery turn-based tactical game in the Worms series. It was developed by Team17. The game was the first in the series to be in 3D and also featured several new weapons. Additionally, some of the weapons operations are substantially different from previous Worms titles. And while it is rated T by the ESRB, which is a first for the series, it is rated 3+ by PEGI, which is also a first for the series. (Before, the games were rated 7+ or 12+) It is unknown why the ESRB chose the higher rating while PEGI chose the 3+ rating. The OS X version of the game was released in April 2004 by Feral Interactive.

The game was announced by Team17 in 2002 as Worms 3, featuring a different logo and initially announced to be published by Activision. In 2003 the name changed to Worms 3D and Activision were dropped as the publisher. It was later announced that Sega would be publishing the game in European territories.

The music was composed by Bjorn Lynne.

The gameplay itself is mostly unchanged from its predecessors, with the exception of the three-dimensional view, which allows the player more freedom, and more possibilities, to complete the task at hand. Modes such as Campaign and Quick Match return from previous versions. The game also features a multiplayer feature, as well as the ability to edit and create teams. The objective of most of the matches is to eliminate the opposing forces' worms, whereas the Campaign mode gives the player sets of specific goals which he needs to complete.

The Campaign consists of 35 small missions in which the player has to utilise their worms to complete a certain task, like destroy enemy worms, collect a certain crate, or even unique missions, such as having to detonate 16 hidden landmines in a certain time.

All of the missions give awards depending on how well the player does. Gold medals usually unlock bonuses as for example maps, challenge missions, information about weapons, or voice banks.

In the Challenge missions, the player has to use a weapon/utility to collect targets that add to their timebank, which increases steadily. Getting a gold medal here unlocks maps or locked weapons.

The Campaign mode contains film references and moments. The level "Place Holder" is an homage to the Jaws series, with the dead shark with a fire extinguisher in its mouth, the boat, and the fuel canisters; on the back of the boat there is a sign visible saying 'ORCA', the name of the boat in the films. Elsewhere, the lighthouse and billboard are recreated, the latter under the guise of 'Worms Island'.

In the game, the player can obtain the Holy Hand Grenade of Antioch, a reference to Monty Python and the Holy Grail. As an additional reference, the only available fuse time is three, referencing a long, drawn-out speech in the film about three being the only time that must be counted before throwing the grenade, after which the King counts to five.

There is a multiplayer map titled "Hold Until Relieved", a reference to The Longest Day, a film about the D-Day invasion. The scene where this quote is said has a bridge, as does the map.

The game received generally positive reviews. Despite this, most reviewerswho? criticized the 3D camera system, that often places behind the objects in landscape with the worm being hidden in front of those.