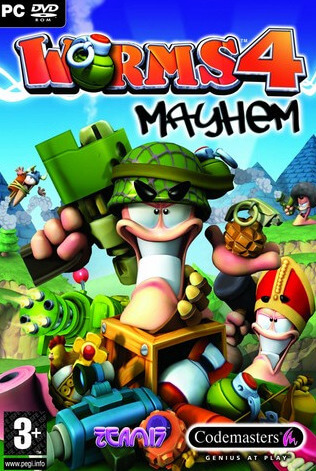 Worms 4: Mayhem is a 3D artillery tactical and strategy game in the Worms series developed by Team17. It is much like its 3D predecessor Worms 3D, except that players can customize their worm's appearance (hats/helmets, glasses, facial hair, gloves/hands) as well as create their own unique weapons in a new feature called "The Weapon Factory". The game also contains a shop where players can buy various items, using points won by completing story missions, challenges, or unlocking trophies. Shop items include new maps, new accessories and attire, personality banks (voices) and game styles. There are several new weapons and utilities included in the new game such as Bubble Trouble, Icarus Potion, Poison Arrow, Sniper Rifle, Inflatable Scouser, Tail Nail and Starburst. Unlike previous Worms games, Worms 4: Mayhem provides cutscenes before each story mission to reveal background information.

The player's team of worms arrives at Worminkle University, where they meet Professor Worminkle, who trains the team to use various weapons. Worminkle then sets the team assignments to sneak into enemy buildings and destroy their construction sites. To flee government agents, Worminkle and the team travel back in time to the Middle Ages using Worminkle's time machine, but the machine gets damaged and they get attacked by wizards and knights. After fighting through them, the team proceed to the Wild West to find gold to keep the machine powered, fighting Boggy the Kid in the process, and to Ancient Arabia to recover jewels stolen by Ali Baboon and his pesky thieves and keep the machine's navigation controls balanced.

After recovering the jewels, Worminkle fixes the machine, but accidentally drops a letter. The team reads the letter, which reveals that the government was planning to build a new research laboratory to replace Worminkle University. Worminkle quickly takes the letter back and continues the journey with the team, but after they stop in prehistoric times, Worminkle betrays the team, telling them he actually used them as part of his plan to escape from the Government. Planning to abandon the team in the Stone Age, he flees, but crashes into a mountain. Determined to catch him, the team battle through caveworms and dinoworms. After reaching Worminkle, the team, knowing of his betrayal, steals the time machine from him and travels back to the present day, leaving Worminkle trapped in the Stone Age forever and panicking.

Gameplay follows on the traditional gameplay of the series, in which teams of worms take turns to use a variety of weapons and items in order to eliminate the opposing team(s). The game is presented in a 3D perspective.

The game also has additional game modes, such as Challenge mode, which presents the player with various challenges (e.g. infecting enemy worms with a poison arrow) which the player must attempt to complete.

Multiplayer mode is available via Hotseat. Online mode is also available on the PC version.

Worms 4: Mayhem received mixed to positive reviews. Criticswho? generally criticized Worms 4: Mayhem for its lack of difference from previous 3D Worms games, difficult controls and illogical AI. However, the range of weapons were praised for including new and existing weapons, along with the level design.