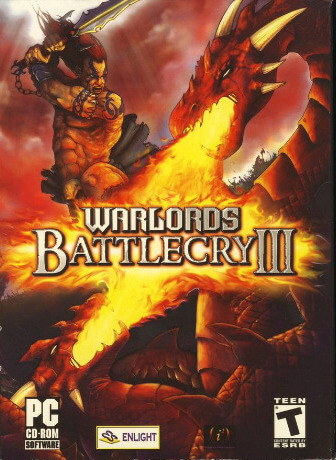 While Warlords Battlecry III is primarily a real-time strategy game, it has some elements of role-playing video game in that players can complete optional quests, as well as create a customized Hero character that can level up from battle to battle and equip unique and powerful items.

The Campaign is a mixture of an overhead strategic map with real-time gameplay. Departing from the system used in Warlords Battlecry II, which consisted of a Risk-style board with territories, Warlords Battlecry III divides the world of Etheria into numerous locations (mostly cities) that players travel between, with various events at each. Almost all of the map locations have missions to play, some of which are not readily visible until other missions have been completed, as well as shops, academies, and/or mercenaries for hire. Once a player enters a mission, the game switches to real-time strategy gameplay reminiscent of games such as Warcraft and Age of Empires. Players use four resources, Gold, Metal, Crystal and Stone, which are used to produce a variety of structures and units. Unlike many other RTS games, resources are present as neutral buildings which can be captured and destroyed (not permanently) and generate resources automatically without player input. Although magic and spells come into play, games are usually decided by the player who has a combination of an overwhelming number of superior units and better micromanaging of his Hero character. The Hero typically becomes extremely powerful by the late game and can slay dozens of normal units alone.

Warlords Battlecry III is unique in its replay ability due to the diplomacy system and the number of races in the game. Depending on which missions have been completed and what was their original race selection, players can be Enemies, Neutral, Friendly, or Allied (which makes that race playable) with each of the 16 races. Preprogrammed biases explained in the backstory mean that it is more difficult for a player to be allied with two warring races, such as Dwarves and Plaguelords, but it is possible.

Warlords Battlecry III has more factions and hero types than the earlier games in the series, with 16 different races and 28 varying character classes. Heroes have groups of loyal soldiers called retinues, which will follow and fight for them in battle, and the level cap for units was increased to 20 in this game, up from 7. The human faction was split in this game into two new races: the Empire and the Knights, and the new races of Swarm, Plaguelord, and Ssrathi were introduced. Each old race received at least one new unit, sometimes several. New magic spells were added, including the all-new Arcane, Poison, and Divination schools. Several new hero classes were added, as well as a brand-new campaign engine and a completely new hero level-up method that includes the ability to level up in the middle of a battle (players were previously restricted to leveling up after battles only). Each faction has a titan that is available at the end of the tech tree, but is extremely powerful, capable of laying waste to whole armies and can strike terror to the hearts of enemy troops.