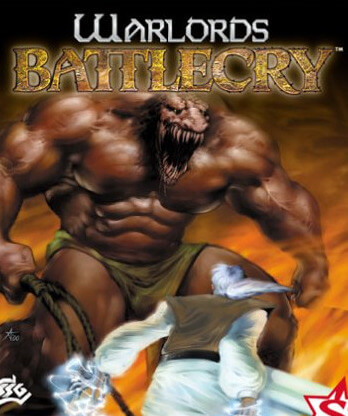 Warlords Battlecry is a real-time strategy video game released in July 2000 for Microsoft Windows. It was the first of new series of RTS games set in Steve Fawkner's Warlords franchise.

The game introduced a hero-building system, combining real time strategy elements with roleplaying elements (hero development, stats and skills). This makes the series the first to be called "roleplaying strategy", a term coined by its creator, Steve Fawkner. There are nine races organized in sets of three:

There are four professions, Warrior, Wizard, Rogue, and Priest. Each profession has at least three specialties, which give access to different skills and spheres of magic.

Warlords Battlecry was commercially unsuccessful in the United States, and journalists Mark Asher and Tom Chick noted that it "didn't even hit PC Data's charts". Writing for CNET Gamecenter, Asher reported in September 2000 that the game's sales in the United States had reached 8,608 units, which drew revenues of $332,662.

Warlords Battlecry received positive reviews. It has an average score of 78 per cent at GameRankings, based on an aggregate of 27 reviews. The editors of Computer Games Magazine nominated Warlords Battlecry for their 2000 "Real-time Strategy Game of the Year" award.

Although released in different times, the three games essentially share the same 2D graphics engine, a gameplay closely resembling that of Warcraft II: Tides of Darkness or StarCraft and have a high number of playable races/sides (ranging from the 9 of WBC 1, to the 12 of WBC II and the 16 of WBC III).

Although the games share the same basic gameplay and graphics engine, and the series is generally well received among Warlords fans and hunters, the community around them has always been small (but loyal), and no serious modding efforts have been done until the third installment was released, although all three installments ended up supported by community (Fan patches) rather than developer patches and mods.

Tzar: The Burden of the Crown
hit
upd
new