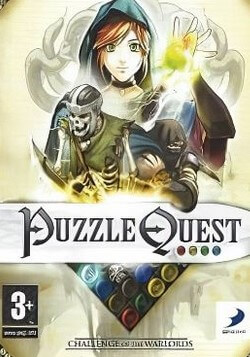 Puzzle Quest: Challenge of the Warlords is a game developed by Australian company Infinite Interactive and published by D3 Publisher. The game combines role-playing with tile-matching elements. Taking place in a high fantasy setting, the player moves their character around the game's world and encounters monsters and other enemies to fight as to gain experience and acquire treasure as in a typical role-playing game. Combat takes place on a board similar to Bejeweled, and by making matches of colored gems, the combatants can cause damage to their opponent, cast spells, or perform other abilities that affect the flow of the game.

The game was first released on the Nintendo DS and PlayStation Portable in 2007, and has since been ported to Microsoft Windows, OS X, Xbox 360, PlayStation 2, PlayStation 3, Wii, iOS, and with plans for a Nintendo Switch version in 2019. Among these ports included extended content: "Revenge of the Plague Lord" which was included in the Xbox 360, PlayStation 3, and iOS releases, and "Attack of the Golem Lord", which will be available alongside the "Revenge" content for the Switch version, under the name Puzzle Quest: The Legend Returns.

Puzzle Quest was a surprise hit at release and received generally positive reviews for the fusion of the two distinct video game genres. Since its release, Puzzle Quest has received a direct sequel, Puzzle Quest 2, and a science-fiction variant, Puzzle Quest: Galactrix. The basic gameplay has also been used as a template for licensed games in the series, Marvel Puzzle Quest and Magic: The Gathering – Puzzle Quest.

The story of Puzzle Quest is based in the Warlords game universe. Players assume the role of a character with various statistics such as combat ability, morale, and magical affinity. A character's predisposition toward individual attributes and spells is determined by the selection of one of four professions at the start of the game. During play, the player takes on quests as part of the main storyline, as well as accepting side quests in order to gain items, experience and gold. Gold can be used to buy equipment that offers bonuses in combat, or it can be used to build up a citadel that unlocks additional content and customization for the character.

The game uses a simple map, and as players accept quests, new towns, cities, and other points of interest appear as available destinations. Each location is connected together by roads, and foes periodically appear between locations, blocking movement until they are defeated. Key quest locations are also marked on the map, and completing quests typically involves visiting such locations in order to defeat one or more opponents in one-on-one battles.

Puzzle Quest was primarily the brainchild of Steve Fawkner, the original designer of the Warlords game series which merged typical RPG elements with turn-based strategy games. The series was successful enough for Fawkner to form Infinite Interactive, which were the primary developers of the first three titles for the series, and did some of the work on the fourth title in 2004 before full development was taken over by Strategic Studies Group (SSG), the publisher for the first three games, due to declining budgets for video games at that time. Fawkner opted to reduce his staffing to three people and use the time to refine their game engines, not releasing any games through 2007.

During this time, Fawkner became hooked on Bejeweled, often playing the game into the late hours of the night. He realized that he could wrap the core match-3 concept into a game with Magic: The Gathering elements and create a story mode in the vein of Final Fantasy Tactics, forming the basis for Puzzle Quest. Fawkner found difficulty in finding a publisher for the title, as they did not have an idea of how many units the game would sell and thus could not estimate a budget for the title. Fawkner eventually was able to gain D3 Publisher that dealt primarily in low-volume Japanese titles, though there still had difficulties with estimating budgets.

The first release of the game in North America consisted of 40,000 units of the Nintendo DS version; according to Fawkner these sold out within a week of shipment, in part due to the game's mention and difficulty to acquire by the popular webcomic Penny Arcade. D3 raced to publish more to meet demand, though at the time were limited by Nintendo's ability to provide black DS cartridges. With the success of the game, Fawkner was able to expand Infinite Interactive to eventually 70 employees to work on the various ports of Puzzle Quest and subsequent sequels.

(0) Comments on "Puzzle Quest: Challenge of the Warlords Full Version"