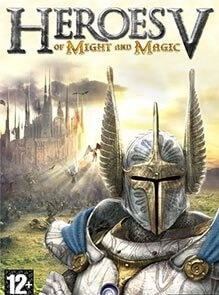 Heroes of Might and Magic V is the fifth installment of the Heroes of Might and Magic fantasy turn-based strategy video game series. The game was released by Ubisoft in Europe on May 16, and then in the United States and Canada on May 24, 2006, with the publisher guiding Russian studio Nival Interactive in its development. Following the closure of The 3DO Company, Ubisoft bought the rights to the Might and Magic franchise, and used Heroes V as a means to reboot the series with a brand new setting, called Ashan, and no continuity to previous titles.

Like the other games in the series, players take control of "heroes" (leaders with magical abilities) who provide their services for a faction, recruiting an army from settlement strongholds, such as castles, out of various forces (humanoid, undead, monsters, and so forth) and then doing battle against roaming armies, enemy heroes and rival factions. The game features a campaign series that covers six factions from Ashan, along with stand-alone and multiplayer scenarios. Unlike the preceding games in the series, which used 2D computer graphics but with some isometric touches, Heroes V was the first to be completely 3D.

A hero can learn a new skill, upgrade an existing one, gain a new ability or create combos of multiple abilities upon gaining a new level or visiting special buildings on the adventure map. There are two sets of skills available to heroes: racial skills and regular skills. A hero can have up to five regular skills and always has the proper racial skill. Skills are divided into four levels: Basic, Advanced, Expert, and Ultimate. Each skill is associated with three to five abilities, depending on the race of the hero. Each level of skill gives the hero a chance to learn one ability under the skill. That is, a hero with Basic level of a skill can learn one ability, Advanced level two, and Expert level three. An ability is not immediately learned when the hero increases the corresponding skill level.

There are six factions in the game: Haven, Inferno, Necropolis, Dungeon, Sylvan and Academy. Additionally, the game's expansion packs added the Fortress and Stronghold alignments.

Haven is a faction populated by humans and ruled by religious warlords; the Holy Griffin Empire propagates "Law and Order" and faith in Elrath, the Dragon of Light. Arising from their military tradition, they have the ability to train their soldiers, promoting them from one level to another. They are the primary protagonists of the game's campaign missions. Their main Heroes are young Queen Isabel and faithful Godric, the king's uncle and the top general for the Griffin Empire.

A dark kingdom of demons from the underworld known as Sheogh, the Inferno is a faction which uses "Gating", a method used to summon additional, though temporary, reinforcements onto the battlefield. Making their infernal abode on blasted lava terrain, the demons are the primary antagonists in the game, led by Urgash, the Dragon of Chaos, and their evil overlord, the Demon Sovereign Kha-Beleth. They are the protagonists of the second act of the campaign, where they are led by ambitious and ruthless Agrael.

Once a secret cult flourishing within the dark underside of the Empire and the Silver Cities, the Necropolis faction resides in Heresh and is ruled by corrupted wizards who worship a twisted spider version of Asha, the Dragon of Order, seeking to find everlasting peace and beauty in death that has been denied to them in life. They can use the dark magic of necromancy to re-animate slain enemies and fill their own ranks with shambling corpses. The Hero for the Necropolis campaign is the shrewd and cunning Markal.

Hailing from the underground empire of Ygg-Chall, the dark elves Dungeon faction are a group of fallen elves whose society is built around faith in Malassa, the Dragon of Darkness, secrecy, plots, and betrayal. They were once part of the Sylvan faction, but became renegades when they made a pact with the mysterious Faceless (in fact they are falsely accused of Brittiga's burning and the king Arniel's death, and they had to turn to Malassa for their survival). They mastered the ability of Irresistible Magic, which made their spells so powerful that even those who had the strongest resistance to magic have little chance to resist. The hero for the dark elf campaign is Raelag, a mysterious and ambitious warlock.

The old Rampart faction from HoMM III in spirit, the Sylvan faction is more distinctly Elvish this time around, residing in the Elven kingdom Irollan which is said to be blessed by Sylanna, the Dragon of Earth. Their heroes focus on archery, and so do their creatures, who can finish off their enemies without touching them. Their racial skill gives entire armies bonuses when fighting certain enemies they have slain previously. They are the counterpart to the Dungeon. The hero for the Sylvan Campaign is Findan, a diplomat and a determined fighter.

The Academy faction is a town dominated by wizards and magical creatures since its debut in the second game of the series. Not much has changed besides its location, moving away from the snowy mountains of the Tower City in Heroes of Might and Magic III to a vibrant desert scene closer to the original Wizard castle, now filled with middle-eastern dress. Most of its heroes focus on magic, and their army comprises mostly shooters and flyers. Their Dragon is Sar-Elam, also known as the Seventh Dragon and the very first wizard who had so much power he became a Dragon and helped to banish the malicious Urgash, the Dragon of Chaos. The hero for the Academy Campaign is young and brash Zehir, the son of the late Arch-mage Cyrus and the new Arch-mage of the Silver Cities.

The critical reaction to the retail version of Heroes V has been generally favourable, with an average review score of roughly 77/100 on Metacritic.

Heroes of Might and Magic V was a commercial success. Its sales surpassed 350,000 copies by the end of June 2006, and it reached #1 on sales charts in Germany, France and the United Kingdom.

All games from the serie "Heroes of Might and Magic"

(0) Comments on "Heroes of Might and Magic V Full Version"