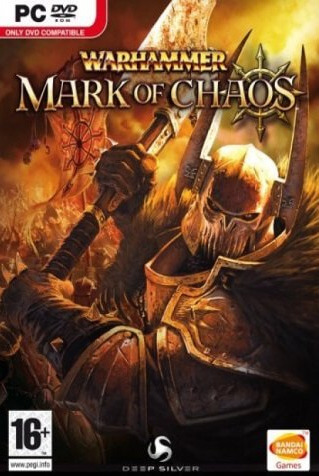 Warhammer: Mark of Chaos is a real-time tactics game set in the Warhammer universe. It was developed by Black Hole Entertainment and co-published by Namco Bandai Games in the US and Deep Silver in PAL territories. The game was released for Microsoft Windows in the US on November 14, 2006, with subsequent release in PAL territories on November 23, 2006.

An expansion, Battle March, was released on September 2, 2008. It contains one new campaign and the addition of Dark Elves and Orcs & Goblins as playable races. An Xbox 360 version was released and titled as Warhammer: Battle March, dropping the Mark of Chaos moniker.

The game, according to the developers, is a game "focusing on the armies and battles while de-emphasizing the tedious aspects of base and resource management". Set in the Warhammer Old World, the player can command one of 4 armies from the tabletop game.

The gameplay is primarily focused on battlefield tactics, thus not featuring RTS gameplay aspects like base-building, resource harvesting or in-battle unit production. Instead, the gameplay is intended to be focused on high fantasy/late medieval battles. Its gameplay is superficially similar to its predecessors and the Total War games; however, the basic game play model is significantly more simplified, and battles are more similar to real-time strategy games like Warcraft III than other real-time tactics titles.

The objective for each battle is defeat of the enemy army by either completely destroying it or causing the remaining units to flee off the battlefield. Battles are fought on a variety of landscapes and settings, with specific terrain types granting bonuses or penalties to units. Units also have morale, and will break and flee if they suffer enough damage or get hit by specific types of weaponry, and stamina, which will cause them to lose defense and speed when sufficiently drained.

The troops present in the game are presented as "units", which is anything from 1 to 96 individual "models", with the specific number depending on the type of unit. The control system is similar to the Total War and Dawn of War in that orders are issued to units in their entirety, as opposed to being issued to individuals. As well as standard orders you are also able to arrange your units into a number of formations, with each formation conferring advantages against specific kinds of attacks. Units will also gain experience over the course of a battle or campaign and will gain improved statistics and more models.

In addition to standard units there are special "Hero" units; unique individuals considerably more powerful than the average combatant. In addition to being able to use and learn new abilities, they can also be equipped with additional weapons, armour or potions that grant the hero with both offensive and defensive skills and bonuses. Heroes also gain experience from fighting, and by gaining levels the player is able to unlock various skills that supplement its combat abilities. Unlike units which consist of multiple models, Heroes are controlled individually. However they can be attached to standard units, fighting alongside the unit's models, giving the unit a morale boost and increasing its fighting capability through the use of skills. Hero units can also initiate or be challenged to duels, where they fight the opposing army's hero uninterrupted until one slays the other, resulting in a morale penalty for the losing side. The duel is for the most part out of the player's control, however the player is also free to activate any duel-specific skills the hero has during the course of the duel, to affect its outcome.

There are 2 single player campaigns, each separated into 4 chapters, one following the Empire and Elven Forces and the other the Hordes of Chaos and Skaven forces.

The majority of the single campaign is a number of different battle scenarios, in which your pre-selected force will combat a number of enemy forces. Winning the scenario will award the player gold. Between battles the game switches to a map of the area, with the location of their army denoted by a figure of their champion. The player is then able to select his or her army and move to another location. This will bring up a force selection screen, and the player will then have to select a limited number of troops and heroes to play the next scenario with. Although the campaign is for the most part linear, there are also optional side quests, which although mostly unrelated to the main story will usually result in the heroes acquiring additional gold, troops or equipment that can be used in the campaign. As well as traditional large scale battles there are also Duel scenarios in which a hero character of your choice will enter straight into a duel with an enemy champion, with victory of either champion immediately ending the scenario.

On the map the player can also access towns and encampments, which serve as the replacement for bases found in other strategy and tactic games. The player can use the gold acquired in previous battles to purchase replacements, new or improved units, upgrades such as better armour or attack power for their existing units and also wargear and items for their hero units. Conversations between characters will also occur at certain points on the map, advancing the story.

In addition to the campaign, the multiplayer modes can also be played as single player skirmish battles.

The game allows for up to four players to battle using either a LAN or over the internet. Multiplayer battles are played in much the same way as the single player. The game includes four different game modes, including normal battles, siege battles where one team has to defend a stronghold from the opposing army, and a reinforcements mode, where capturing strategic points on the map awards points that enable players to buy new units during the battle.

Prior to the battle, each player has a certain number of points with which to select an army, which is chosen by the host of the game prior to army selection. The points can be used in a variety of different ways, either buying new units, upgrading units or buying additional equipment or skills for your hero units. This enables a player to outfit an army in a variety of styles suitable for their playing style. Although the player is free to choose any configuration, there are also examples of army configurations for each of the 12 factions featured in game. In a tribute to the tabletop game, players are also able to customise their army's colours and banners. In addition, there is also a comprehensive model editor where players can change the look of individual models using a variety of heads, limbs, armour and weaponry sets. These army configurations can then be saved for use later.