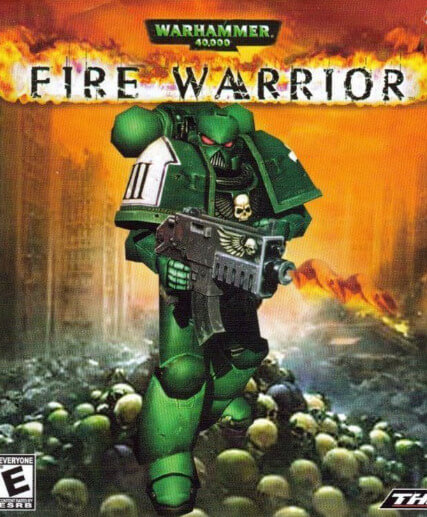 Warhammer 40,000: Fire Warrior is a Warhammer 40,000 video game available for the PlayStation 2 and Microsoft Windows. It was developed by Kuju Entertainment and released in October 2003.

The game is a first-person shooter, where the player takes the role of a Tau Fire Warrior named Shas'la Kais, seeking to rescue his leader and defend his race from the aggressive Imperium of Man and forces of Chaos.

It was released digitally by Chilled Mouse on July 25, 2019 on GOG.com.

The story takes place over a period of 24 hours. The game begins with Kais' first mission, an attempt to rescue the Ethereal Ko'vash from Governor Severus. He infiltrates Severus' prison-fortress, and escapes with Ko'vash intact. As the Orca dropship begins docking with the Tau Emissary class cruiser, it is attacked by an Imperial Battleship, and boarding pods are launched. Kais then fights a desperate battle against a force of Storm Troopers as they try to disable the cruiser's engines, and assassinate the Captain. After Kais fails to rescue the Captain, he and several teams of Fire-Warriors are launched, by boarding pod at the Imperial ship. There, he disables the ship's guns and nearly captures the ship's commander, Admiral Constantine. Kais is clubbed on the head by Captain Ardias, however, and is captured. Ardias brokers a truce between the Imperium and the Tau, and it is revealed that Governor Severus has been seduced by the Powers of Chaos, teleporting a contingent of Word Bearers Chaos Marines onto the ship. They capture the ship's remaining guns, in an attempt to restart the Imperium-Tau war, but are stopped by Kais' destruction of the guns.

Ardias then sets the ship to self-destruct, and Kais escapes via a Dreadnought drop-pod. Landing in the midst of a ruined Imperial city, Kais fights his way to fellow Tau Fire-Warriors, and learns from Ardias that Severus plans to use an Imperial Titan held in the City. Kais destroys the Titan, enters Severus' fortress, and kills Severus and his daemonic master. The game ends with Ardias ordering that the planet should be destroyed to prevent the taint of Chaos from spreading. Many adversaries from the Warhammer 40,000 universe are encountered by the protagonist Kais, such as Chaos Dreadnoughts, Chaos Space Marines, Imperial Guard, Daemon princes, Obliterators, and an Imperial Valkyrie.

In October 2003, Black Library Publishing released a novelization of the game under the same title (Spurrier, 2003). The book explores the plot of the game in much greater detail, as well as a close look at Tau culture.

Fire Warrior received mediocre reviews from the majority of the gaming press sites on the PC version, receiving an average score of 6.0 from sites such as IGN and GameSpot. It was described as a let-down "shooter by the numbers" FPS for the PC, despite its promotional posters claiming "Who needs Halo?". However, IGN gave the PS2 version an 8. and the game received a B- from the Play Magazine, along with other decent reviews. The PS2 version was actually better received by critics and fans all around, earning it a 7.1 on GameRankings