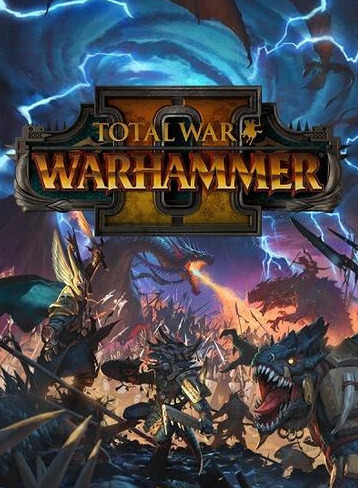 Total War: Warhammer II is a turn-based strategy and real-time tactics video game developed by Creative Assembly and published by Sega. It is part of the Total War series and the sequel to 2016's Total War: Warhammer. The game is set in Games Workshop's Warhammer Fantasy fictional universe. The game was released for Microsoft Windows-based PCs on 28 September 2017. Feral Interactive released the game on macOS and Linux on 20 November 2018. The game requires a Steam account to play.

In the campaign, players move armies around the map and manage settlements in a turn-based manner. Players engage in diplomacy with, and fight against, AI-controlled factions. When armies meet, they battle in real-time. The game also has a custom battles mode where players can create customised real-time battles, as well as online multiplayer battles. Those who own races from the first game will have the same races unlocked for multiplayer in the second game.

The game's announced races in the campaign include the Lizardmen, High Elves, Dark Elves and Skaven. The Tomb Kings and Vampire Coast (a faction of undead pirates) debuted later as paid downloadable content factions.

The main campaign of the game is called Eye of the Vortex. It is a narrative-focused campaign where each of the playable races has its own story and cutscenes. In addition, players who own both Total War: Warhammer and Total War: Warhammer II have access to a huge combined campaign called Mortal Empires, which is more of a sandbox experience. Mortal Empires must be downloaded manually from Steam, but is free for players who own both games.

The campaign can also be played online with another player in co-operative or head-to-head modes.

Battle for the Vortex

The Old Ones, powerful godlike beings, created races in the Warhammer world to fight the forces of Chaos. The stellar gates which the Old Ones used to enter the world collapsed, leading to a flood of Chaos that was held at bay by the Lizardmen. Two High Elf heroes in Ulthuan responded to this threat. Aenarion "the Defender" mustered armies whilst Caledor Dragontamer planned to drain magical energy from the world, thus stopping the Chaos invasion. This manifested itself as the Great Vortex, accomplished with the help of the Lizardmen leaders, the Slann. It drained Chaos energy at the expense of locking Caledor and his mages in time, eternally casting spells to maintain the vortex.

Millennia later, in the time when the game is set, a Skaven rocket disguised as a twin-tailed comet disrupts the Great Vortex. The four main playable factions respond to this in different ways. The High Elves and Lizardmen seek to stabilize the Vortex, while the Skaven and Dark Elves seek to use its power for world conquest. The Skaven launched this rocket to provoke rituals from these four major factions. The Skaven could then harness this ritual energy to allow the Skaven god, the Great Horned Rat, to enter the world and thus conquer it. When the player completes the fifth ritual, their race fights a 'final battle' in the Isle of the Dead to determine the fate of the Vortex and thus the world. Winning the 'final battle' results in winning the race's objectives. The High Elves and Lizardmen stabilize the Vortex. The Dark Elves use the Vortex's power to transform their leader Malekith into a god. The Skaven summon the Horned Rat and conquer the world.

Rise of the Tomb Kings

Several millennia ago, the desert kingdom of Nehekhara was once the greatest human civilization in the Old World. However, Nehekhara was destroyed by Nagash, the first necromancer. Through the power of his Black Pyramid, Nagash enacted a great spell that would kill all that lived in Nehekhara and raise them as his undead servants. Before the spell could be completed, Nagash was slain by the last Nehekharan King Alcadizaar with the aid of the Skaven (who had initially allied with the Great Necromancer, but betrayed him after they realized how great a threat Nagash was). The Nehekharan dead returned as the Tomb Kings, but because Nagash's ritual was incomplete, many of the Tomb Kings retained their free will and intellect.

In the current day, the false twin-tailed comet has stirred the Black Pyramid from its slumber and courses with power. It is discovered that 5 of the 9 books of Nagash are needed to control the Black Pyramid. Four Tomb King factions battle to control it: Settra the Imperishable, first and greatest king of Nehekhara, seeks the pyramid's power to regain control over all of Nehekhara and begin global conquest. The exiled Grand Hierophant Khatep seeks to use the pyramid to fulfill his promise to Settra to transform him and the Nehekharan nobility into immortal golden beings. Queen Khalida seeks the pyramid's power to destroy all vampires in the world and to take revenge on her cousin, Neferata (the first vampire). Arkhan the Black, the Liche King and Nagash's second-in-command, seeks to control the Black Pyramid and use its power to resurrect his master.