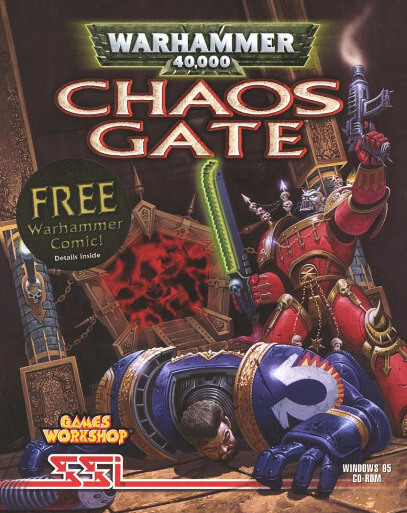 Warhammer 40,000: Chaos Gate is a video game set in the gothic science fiction backdrop of the Games Workshop game system Warhammer 40,000. In it, players take command of a number of squads of Ultramarines under the leadership of Captain Kruger. They are pitted against the armies of the Chaos Lord Zymran, who commands the traitor marines of the Word Bearers and their daemonic allies. In the Warhammer 40,000 background, the Ultramarines and Word Bearers are ancient enemies from when they fought during the Horus Heresy.

The game is turn-based and takes part on a gridded playing screen. Each turn an Ultramarine can take a certain number of actions, according to how many Action Points he has. Actions include moving, firing a weapon or throwing a grenade. The Chaos AI then takes its turn in the same way. Ultramarine players command a number of squads, vehicles and characters from the Space Marines Codex.

Chaos Gate features an experience system, where Space Marines gain experience and can improve their statistics as they participate in missions.

Each Space Marine can be assigned to a general-purpose Tactical Squad or to one of three specialist formations: Assault, Devastator and Terminator Squads. Additional weaponry can be picked up from weapon crates found in the campaign maps.

Chaos Gate was originally released for Windows 95 and Windows 98 but has since been made compatible for modern versions of Windows as well. Chaos Gate was developed by Random Games and originally published by Strategic Simulations. In its release by Hasbro Games, Chaos Gate was bundled with Final Liberation: Warhammer Epic 40,000, set in Games Workshop's Epic 40,000 game system that pitted the forces of Humanity against marauding Orks. In 2015, GOG Ltd republished the game digitally.

Richie Shoemaker of PC Zone called Chaos Gate a title that "slowly grabs hold of you and keeps you entertained throughout its duration; something you'll look back on with fond memories rather than foul".

Chaos Gate was a finalist for Computer Gaming World's 1998 "Best Strategy" award, which ultimately went to StarCraft. The editors called Chaos Gate "perhaps the best iteration of the WarHammer universe to date, although some weak AI hampered its turn-based squad-level combat".