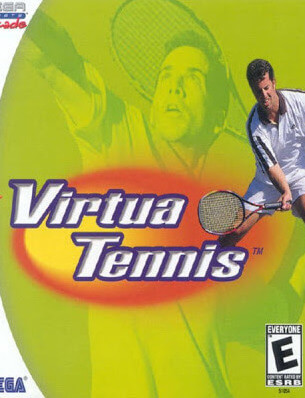 Virtua Tennis (Power Smash in Japan) is a 1999 tennis arcade game created by Sega-AM3. The player competes through tennis tournaments in an arcade mode. For the home console market the game was expanded with the introduction of the campaign mode. It was later ported to Dreamcast in 2000, and for Microsoft Windows in 2002. A Game Boy Advance version was also released in 2002.

The player must win 5 matches played on different surfaces and venues to win a tournament. If the player performs well enough, he is challenged by Master, one of the game's bosses.

This is a single match in which the options are customizable.

The match can be played as singles or doubles with up to 4 human players (2 for singles). The duration can be varied between one game and one set. Other options include the court that the match is played on and the skill of the opponent(s).

Virtua Tennis received very positive reviews with the UK version of the Official Dreamcast Magazine rating it at 9/10, as well as overwhelmingly positive reviews from users. Players were pleased with the quick learning curve and the wide variety of training exercises available. The game became one of the few Sega All Stars.

In Japan, Famitsu magazine scored the Dreamcast version of the game a 33 out of 40.

It was also featured in Guinness World Records 2017: Gamer's Edition where it says that the game got GameRankings score of 91.37% based on 33 reviews.