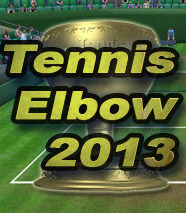 Tennis Elbow is a series of tennis video games developed by France-based firm Mana Games. Its first version was released in 1996 and as of May 2015 it is currently on its 2013 version, available for Windows, Mac & Linux platforms.

The game is simulation oriented, and is often seen as being the one offering the most realistic tennis experience in term of rallies and tennis sensations.

After more than 2 years spent in Steam Greenlight, the 2013 version finally got released on Steam on March 13, 2015.

The game is regularly updated and as of July 2018 has seen 10 major updates for the 2013 edition.

The next edition will be called "Tennis Elbow 4" and its early version is planned for 2019.